Marvel March has had its ups and downs, but we were able to get through all the films. Eventually will fill the site with reviews for all of them, but for now let’s rank Marvel’s best animated movies.

7. Ultimate Avengers -The first Marvel animated feature also proves to be one of their best. A fun origin tale of the Avengers that has some cool action setpieces and decent voice acting.

6. Avengers Confidential: Black Widow and Punisher – Marvel has started a string of team-up films that offer interesting results. The most recent sees master spy and deadly vigilante make uneasy partners as they go against an army of Bio-Soldiers. And it works for the most part. Film is really bought together by the climax which sees some of the Widow’s friends making an appearance.

5. Thor: Tales of Asgard – Making a child hero interesting without making them whiny brats is a tough line to tow, but the creators behind Thor: Tales of Asgard do a terrific job with making a younger Thor, a bit defiant but with a giant chip on his shoulders that doesn’t get in the way of a fun story. Even the relationships with the principal characters is handled well. Sadly, I don’t believe we’ll ever get a follow-up to this. 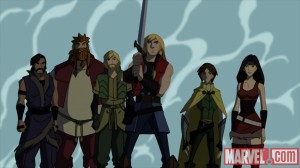 4. Iron Man and Hulk: Heroes United – The look takes a bit of time to get use to, but once it click it really does stand out as something special. More than that, this film has a ton of humorous moments between Iron Man and Hulk, which really carries the film. I would love to see more films in this style, but perhaps with a better villain. 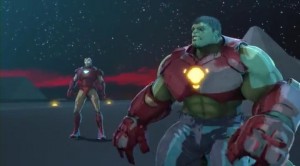 3. Hulk Vs. – This is a tough one to rank. If it was Hulk Vs. Wolverine on its own, probably would be our number one pick with the humor of Deadpool, the brutality of the fights between Wolverine, Omega Red and the rest and of course there is the Hulk just wrecking crap all over the place. On the other hand, Hulk Vs. Thor would find itself a bit further down our list as it just goes on too long and isn’t nearly as interesting. We split the difference and made it our number 3 pick!

2. Next Avengers: Heroes of Tomorrow – Crafting a set of original but derivative characters, and having them star in their own film with no real backstory is a risky move, but one I’m glad Marvel attempted as it proved to be one of their best animated projects to date. Next Avengers amps up the action, the drama and the character interactions. While giving us fun and likable characters, who have the difficult task of living up to their mythical parents. It makes for a hell of an adventure. 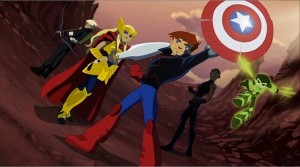 1. Planet Hulk – The Hulk is easily the MVP of Marvel’s animated projects. Being featured in most of their good ones. So of course, his best solo outing would top our list. Planet Hulk is a loose adaption of the storyline from the comic books, and it was a smart one to adapt. Featuring some really brutal but visually pleasing fights against various alien creatures, it allows the Hulk to be the Hulk without casting him as this unknown quantity on Earth. It allows him to finally be the hero he can be. It has some great voice work, cool animation and enough fights to sustain you for the long haul. If you see one Marvel Animated movie, make it Planet Hulk!

There you have it, our Top 7 Marvel Animated Films. Agree? Disagree? Let us know in the comments below!