A lot of people are justifiably excited for 2018’s Captain Marvel movie, which of course will be the first Marvel Cinematic Universe film to feature a female lead. That’s quite the long way off though (we’ll get to see Avengers: Infinity War – Part 1 before then), but have no fear–there are plenty of bad-ass ladies already occupying the MCU. Female portrayals in modern media has been a hot topic as of late, so I wanted to dedicate one of our lists to celebrating a handful of the best female characters in the Marvel Cinematic Universe so far. Hopefully by the time we even get to Captain Marvel there will be some exciting new candidates for this list! (Looking primarily at you, Scarlett Witch, Wasp, and Medusa, among others!)

In case you need a refresher: With Phase Two of Marvel’s Cinematic Universe wrapping up after this summer’s Avengers: Age of Ultron and Ant-Man, we decided it was a good time to take a look back at some of the best moments Marvel Studios has brought to the silver screen. Between now and Age of Ultron’s release we’ll be counting down several Top 7 lists that celebrate many of the greatest moments from the MCU so far. For reference, this includes every movie released to date (Iron Man, The Incredible Hulk, Iron Man 2, Thor, Captain America: The First Avenger, The Avengers, Iron Man 3, Thor: The Dark World, Captain America: The Winter Soldier, and Guardians of the Galaxy), as well as all the straight-to-video Marvel One-Shots (“The Consultant”, “A Funny Thing Happened on the Way to Thor’s Hammer”, “Item 47″, “Agent Carter”, and “All Hail the King”), and also Marvel’s ongoing foray into television (as of print date: Agents of SHIELD up to the mid-season break in Season 2, Agent Carter through 6 episodes, and before Daredevil has aired). Finally, this should go without saying, but: SPOILERS AHEAD! 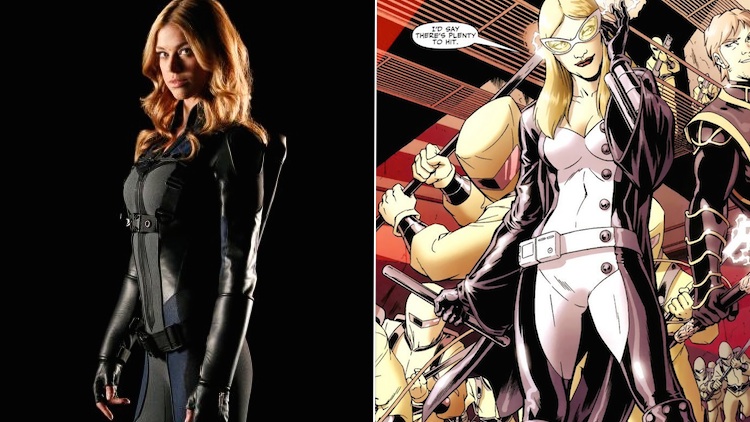 7) MOCKINGBIRD (Bobbi Morse)
One of the most recent additions to Phil Coulson’s patchwork SHIELD team, Bobbi has quickly emerged as one of the more exciting characters to watch on Agents of SHIELD. Adrianne Palicki brings a commanding presence to every scene in the role, particularly in scenes with high stakes dialog. Mockingbird has also proven to be an elite agent in combat, easily dispatching highly trained adversaries with an efficiency matching or exceeding other stars in the SHIELD lineup like Agents May and Ward, and even Barton and Romanoff. Her working relationship with ex-husband Lance Hunter could easily have come off as forced or cheesy, but it’s actually been genuinely funny and charming so far. All in all, Mockingbird has been a fantastic addition to the show and a big part of Agents of SHIELD‘s second season resurgence. 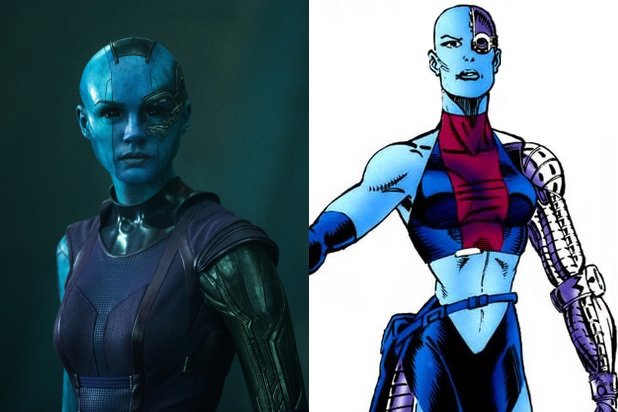 6) NEBULA
One of two adopted daughters of Thanos featured in Guardians of the Galaxy, Nebula took a bit of a backseat to Ronan as the villain of the film. Even in her handful of scenes, however, Karen Gillan’s rendition of the iconic character stole the show. Part cyborg thanks to augmentations from her father, Nebula–along with her sister–is considered one of the most lethal women in the galaxy. She’s strong, acrobatic, and merciless, and her escape at the end of Guardians promises that she’ll continue to be a key adversary in future cosmic movies as well as the overall Marvel Cinematic Universe. After all, she plays a key role in the source material for Phase Three’s Avengers: Infinity War…. 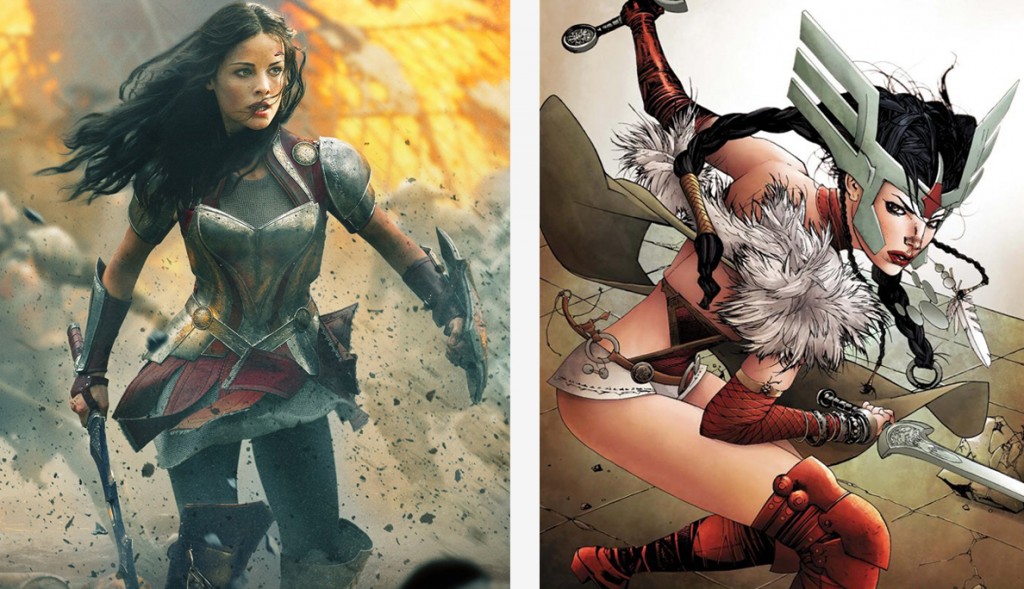 5) LADY SIF
Just ask her famous companions, The Warriors Three: there is no mightier woman in Asgard than the great Lady Sif. She’s been the lone female representative in Thor’s entourage, but her skill and reputation on the battlefield are exceeded only by the God of Thunder himself. Jaimie Alexander has proven a perfect choice to play Sif as she brings equal parts bravado and playfulness to her scenes. She’s also been the biggest non-SHIELD character to make a cameo in the Marvel Cinematic Universe’s TV shows as her appearance was one of the scattered bright spots in season one of Agents. Sif may not be appearing in Age of Ultron, but we already know she’ll be returning to the small screen and she’s bound to be a key figure in the looming Ragnarok. 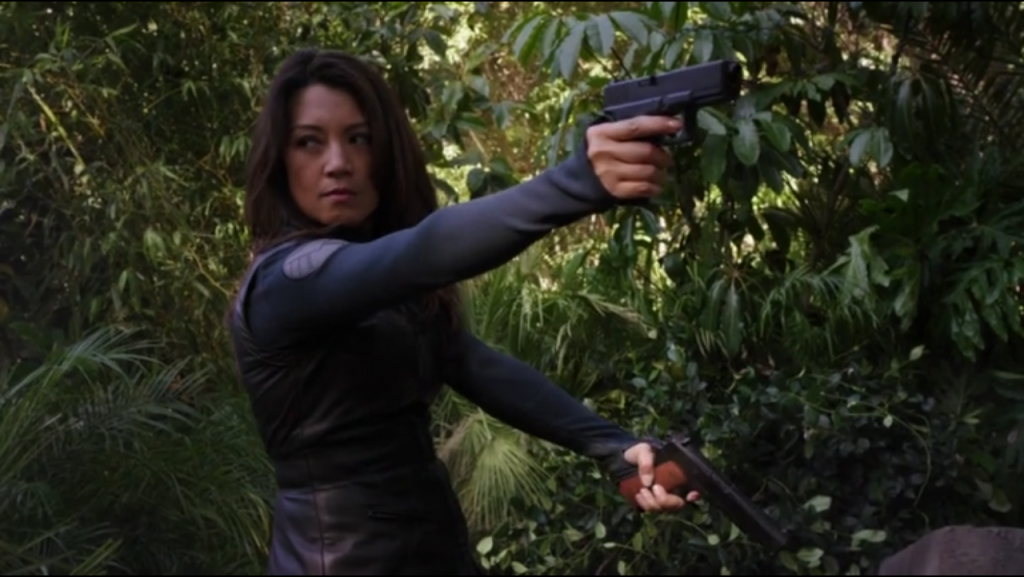 4) AGENT MELINDA MAY
There was a time (most of season 1) when Agents of SHIELD was spinning its wheels from week to week struggling to gain any traction. Even during that time, however, “The Cavalry” gave us a glimpse of how fun watching a team of elite SHIELD agents just might be if Coulson ever managed to enlist more physical partners than scientists and hackers (nothing against Fitz-Simmons or Skye, but fans want a SHIELD show that gets its hands dirty a little bit). Time and again, Agent May has proven herself such an elite fighter than many fans can openly debate whether she or Black Widow would win a hypothetical skirmish. May’s stoic presence has also been a needed counterweight to Coulson’s sometimes whimsical demeanor, and she’s been involved in a couple of thrilling story arcs without losing her status as a fan favorite among the cast and team (unlike a certain Mr. Ward). Shout out to Ming-Na Wen–who’s Disney credits also include the voice of Disney Princess Mulan–for nailing the wholly original character. 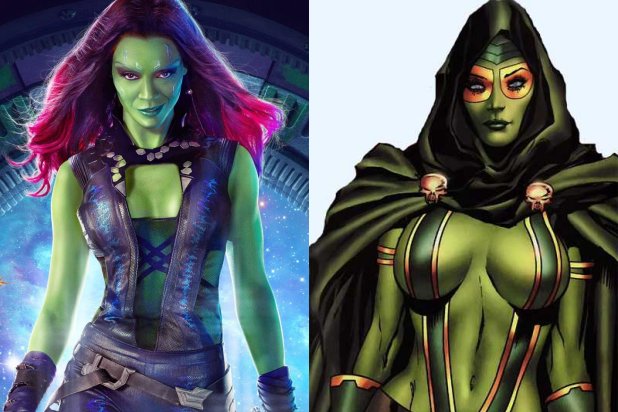 3) GAMORA
Our other cosmic starlet is none other than the green Guardian, Gamora. After living nearly her whole life amongst enemies, Gamora attempts to seize an opportunity to win control of her own fate but instead gets roped into an unlikely tribe of misfits. She’s been proclaimed the deadliest woman in the universe and is notorious for her skills as an assassin. We get to glimpse her talent numerous times throughout Guardians of the Galaxy, brought to life by sci-fi vet Zoe Saldana. One particularly memorable scene appeared to picture Gamora being wooed into a kiss by playboy Peter Quill, a somewhat cliche trope of male-led action movies; it was a hilarious flip of the script, then, when Gamora’s assassin instincts kicked in to spoil the smooch. There’s still some room for her to truly earn the reputation anointed her, but through one movie, Gamora is definitely a character to keep an eye on. Hopefully for the fans she’s got a family reunion or two in her future. 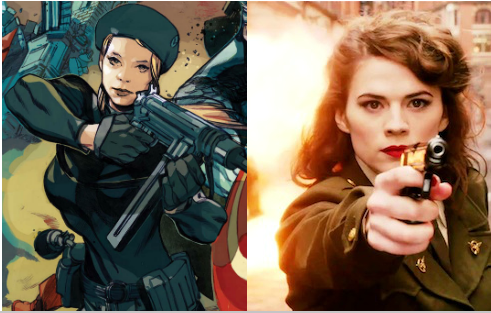 2) PEGGY CARTER
Captain America’s “best girl” is now the star of her very own TV mini-series, and for good reason. Peggy’s quietly been one of the Marvel Cinematic Universe’s most important players, having been involved in the supersoldier project that created Cap while also being one of the founding members of super spy agency SHIELD. Despite the 1940s being Peggy’s heyday, Hayley Atwell has been so good in the role that Marvel can’t stop bringing her back. Since The First Avenger she’s appeared in her own Marvel One-Shot, the Captain America sequel, and in numerous flashbacks on Agents of SHIELD, until finally landing her own show to fill the gap during SHIELD‘s midseason break. Agent Carter has done a great job exploring the character and her very human struggle of establishing herself in the society of her period, while also showing off the skillset and panache that makes her such a fun character to see on screens big and small. 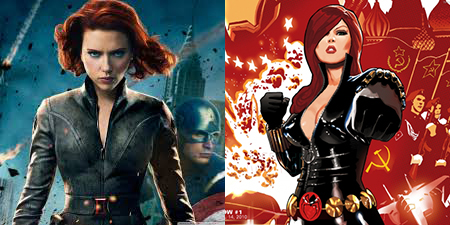 1) BLACK WIDOW (Natasha Romanoff)
I mean really, is there any argument here? Played by the gorgeous-yet-intimidating Scarlett Johansson, Black Widow was first introduced into the MCU in Iron Man 2 and is, so far, the only female member of the Avengers. She was also basically a co-lead to Captain America in The Winter Soldier and provided a great foil to Steve Rogers in that movie. Equipped with ridiculous athleticism and hand-to-hand combat proficiency, plus two electric “stingers” on her wrists, she’s proved a force to be reckoned with despite the lack of any actual superpowers. Even when she’s not fighting, she’s known for her intelligence and dry sass, proving to be a masterful interrogator and computer expert. The former Soviet super spy has kept busy since defecting, excelling as both an elite SHIELD agent and an Avenger; it’ll be very interesting to see where we find her in Age of Ultron now that she’s a free agent.

Want more Marvel? Be sure to check out our other articles in the series, and don’t forget to follow me on Twitter @RaggySays!
– Top 7 Uses of Music
– Top 7 Cameos