Welcome once again to Nerds On the Rocks’ Top 7 List. Why 7? Why not!

This week in honor of the release of Mario Party 9, we shall take a look at the top 7 Drinking Video Games as voted on by our fans. Some interesting choices, and some expected ones. Let’s get to board

7)Scene It!- Board games are always a good social event. They tend to favor luck and cunning as much as skill and timing so everyone feels like they have a chance to win. Scene It! is a game that really tests your memory of movies, but there is also an element of timing involved, which makes for an interesting drinking experiment. While this article is mostly focused on video games, Scene It! the board game franchise shouldn’t be overlooked either for a fun night of tom foolery. 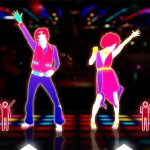 6)Just Dance- The new king of the social video game scene, Just Dance has been a smash hit for the past 3 years or so. While many enjoy getting up and moving their bodies in rhythm to the music, drinking adds a whole new element. Allowing more socially shy individuals to really let loose and show their moves. Much like an entry later on in the list though, I feel like Just Dance is a game that seems better served to be played while drunk not necessarily to drink to.

5)Goldeneye- Always the sentimental favorite, Goldeneye has been the go-to couch competitive FPS for many years. The game offer up so many options that you can cater your drinking rules to the mood of the night. Guaranteed to offer up hours of quality bonding and giggling, Goldeneye is one of the premiere drinking games on the market. 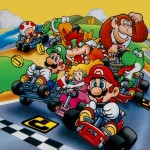 4)Mario Kart- We enter the Nintendo Zone. For such a family friendly company, a lot of you seem to think they make stellar drinking games. Perhaps, they realize the stress of dealing with families. The first franchise from them is Mario Kart, a franchise that is both loved and hated because of its “rubber-ness”. Like a good board game, Mario Kart values skill above all else, but there’s also a lot of luck and randomness involved with the games that keeps players engaged throughout it all. Your skill can be bested by an odd combination of luck andÂ perseverance. Making this even more thrilling is that folks prefer to drink while playing this game, meaning you’ll have to be quick with a drink if want to keep both hands on deck.

3)Super Smash Bros- Unlike Mario Kart and the one further down the list, Smash Bros actually values skill more than any other Nintendo franchise on this list. Its even easier to see when you remove items from play. That said Smash Bros makes for a good time because of its use of 4 characters on screen and so many variables to keep even the most-skilled player on their toes. The game will make for an enjoyable night any time of the week.

2)Rock Band- This was an interesting choice, especially this high up on the list. To me Rock Band seems like the type of game that would be fun to play while drunk not necessarily a game you want to play and drink at the same time. Since it takes a lot more hand-eye coordination than most video games, it is a blast to watch people attempt to play it in an altered state. 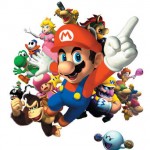 1)Mario Party- Has there ever been any doubt as to which franchise is the greatest drinking experiment of them all? The game just features the right amount of skill and luck that it can screw over even the best players. There’s so manyÂ opportunitiesÂ to drink (there are a variety of rules you can find around the web, and soon some official NoTR ones). And the pacing of the game is just perfect where drinking doesn’t actively interfere with your performance. At least as far as in game goes.

There you have it ladies and gentlemen, the Top 7 Drinking Game Franchises as picked by our lovely audience.Â OverÂ the coming weeks and months, we hope to fill out this list with some custom NoTR drinking rules so look out for that!