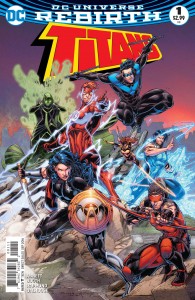 Friendships that were lost and forgotten have returned in a “Flash” in this issue of Titans. Wally West is back with his friends who have grown up, but that doesn’t take away the fun between these characters. Abnett does a great job giving each character a chance to interact with the fastest man alive. The issue focuses on finding out what happened during the missing ten years and what caused it. Digging deeper into Wally’s mind reveals his love for Linda as well as awakening what caused the flash to disappear.

This issue did a good job putting Wally in the spotlight and allowing the fun we have expected with Titans to continue even if they are a bit more mature. The art for the most part was very pleasing, the reveal of the person behind the disappearance was a cool panel. I am not the biggest fan of Wally’s costume, I like that it keeps his Kid Flash look but with his red hair and the red suit it doesn’t mesh to well.

Overall, Titans #1 was a good stepping stone for anyone who enjoys these characters. Abnett does a good job catching everyone up to speed quickly with what happened to Wally while not spending the whole issue on it. There was a few moving parts and the reveal at the end was visually pleasing. Wally is back and with his friends, which is a great thing for all of us!