The Flash Season 3 New Rogues Review — Man in the Mirror 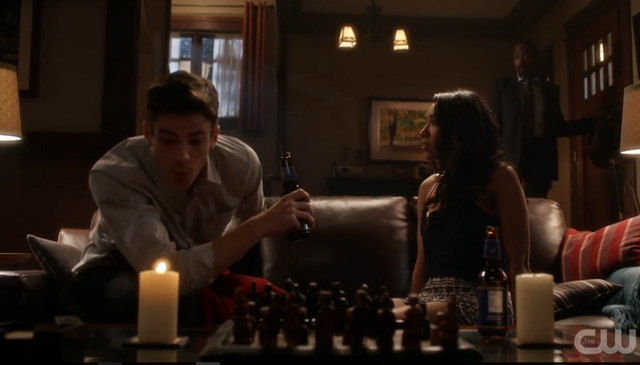 Speedforce spoilers coming your way. Our episode begins with a flashback back when the particle accelerator exploded. Here we see Leonard Snart (Wentworth Miller) and Sam Scudder (Grey Damon) have a friendly argument.

After the big bang, Scudder emerges 3 years later looking for Snart as he steps out of a mirror! Hello, Mirror Master! You’re quite the dresser for a villain. We get a fun training scene as Jessie (Violett Beane), full uniform & Barry put in miles. It’s fun to see Barry (Grant Gustin) in the role of mentor. Often he’s the one getting advice.

So Barry and Iris (Candice Patton) decide to have alone time at…home. So they get to kissing and Joe (Jessie L Martin) walks in on them and — IT IS WEIRD. The cast was able to convey the awkward so, so well. Oh, but the delicious cringe doesn’t end there. Jessie and Wally enjoy some alone time as well. Jessie is pretty quick (ha) I tell you & kisses Wally (Keiynan Lonsdale). The young West kinda brushes it off, citing “hey we can’t be a thing, we live on different Earths”. Let’s stay friends though, oh boy.

Team Flash eventually realizes when Harry (Tom Cavanagh) leaves they’ll be short a man. It’s decided they look for another Harrison Wells to help. So they cook up a tachyon laser embedded IQ test & fire it off to the multiverse. During this time, Mirror Master is searching for Snart & tosses people of out windows in the process. However Leonard isn’t around *cough*DC Legends*cough*. 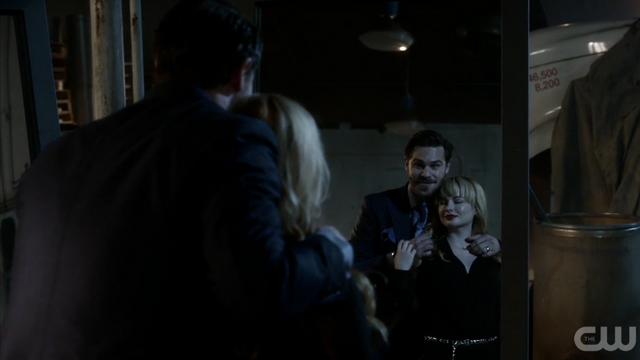 Joe and the conveniently single DA Cecile, question Rosalind Dillion (Ashley Rickards). Before they can confirm a date, Mirror Master frees his girlfriend Dillion, whom was code named Top. Team Flash then shuffles through the applications of the Harrison Wells’ they’ve received. This had to be the best scene in the episode. Tom Cavanagh played multiple personalities that were very fun to see. You tell me what’s better than a Wells so nerdy everyone passes on him? I’ll wait.

When Iris confront Joe and Barry to get over their weirdness with the dating. In the nick of time, the two saves the audience from the cringe with a crime in progress. Barry unfortunately gets stuck in a mirror because Jessie screwed up. Naturally, she feels bad but a good pep talk and a kiss(!) from Wally fixes that. So he gets over that whole you live on another planet really fast.

Team Flash is kinda at their wit’s end to help the man in the mirror. Now Caitlyn (Danille Panabaker), unbeknownst to anyone, uses her freezing abilities to help Barry out of the mirror? How long can she keep up the charade? With a clever hologram of Snart, Barry tangles with mirror master. Meanwhile, Jessie and Top have a rematch. Jessie uses her genius to score her first bad guy take down (Yay!). Barry makes use of special mirror tech to foil Scudder and ship me off to Iron Heights. A win with science and intellect is the Flash at its most fun if you ask me. 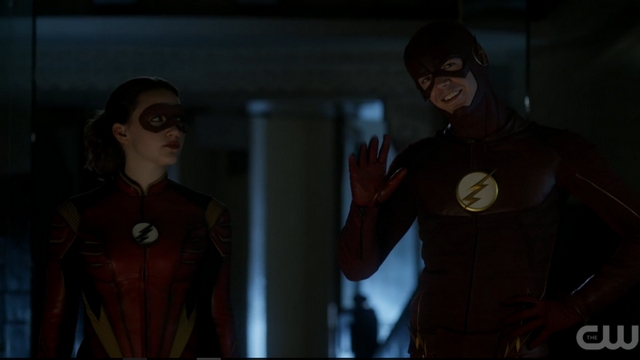 Team Flash then recruit the help of Harrison Wells from Earth-19. Formally introduced as HR, he’s funny and quite friendly. A different kind of Wells that’s pretty alien to us. But we worry about a gut feeling Harry could help but shake during the casting videos. He thinks something is off.

The Earth 2 family hugs it out with everyone and returns. Barry and the Iris weirdness ends and then Barry announces he should move out. Joe hilariously responds with, “well you’re grown, it’s about time”. Best TV dad is best TV dad folks.

Our episode ends as Caitlin’s powers start going crazy.  Will she be able to continue to keep it hidden? Will she be a threat?

This episode had a better run than others. The episode was equal parts humor, fun, personal, and a dash of romantic. No road bumps were encountered and Jessie Quick was formally introduced intosuperherodom