Don’t blink or you’ll miss the spoiler warning. Episode 8 of the Flash serves as a part of the 4 way DC TV crossover event. Regardless of this this was still very much a Flash episode through and through. Our episode begins with Green Arrow (Stephen Amell) and the Flash(Grant Gustin) under attack — how did that happen?!

So go back half a day to see what lead to this event. The Flash team is monitoring Wally(Keiynan Lonsdale) testing himself in the speed lab. Apparently in just a few days, he’s clocking in speeds at mach 2. The same speed Barry achieved at the end of season 1. Yeah, Kid Flash can seriously move. This is really concerning to Iris (Candice Patton). So she has Joe (Jessie L Martin), Cisco (Carlos Valdez), and Caitlin (Danielle Panabaker) swear to not encourage him. Now, keeping a speedster still sounds like an act of futility. However, she’s a sister very worried about her kid brother.

Before we can maintain some quiet, Barry speeds off to a meteor that crashes in Central City. The thing is…it’s not a meteor, but a spaceship! Them some very unfriendly aliens run into the city as the Flash is catch off guard. So afterwards he meets up with ARGUS director Lyla (Audrey Marie Anderson). Team Flash is given the rundown of the aliens, known as the Dominators. It’s pretty obvious coming in peace is far from their agenda. Barry and company realize this threat can’t be beat with him alone. He definitely doesn’t intend to do so. 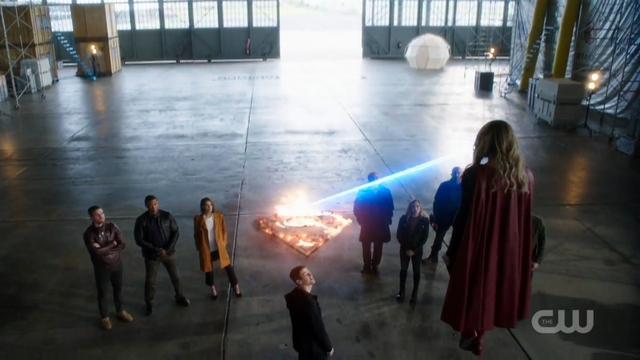 So, Mr. Allen goes recruiting help to face the alien menace! This is where our episode gets gleefully geeky. The Flash speeds off to Star City to see the Emerald Archer aka Oliver Queen. As he mentions his reasons for the visit, he and Ollie share so tongue and cheek humor only they could. Diggle (David Ramsey) tags along, Thea (Willia Holland) gets out of retirement, and Felicity (Emily Bett Rickards) thinks everyone is crazy. So Team Arrow is on board!

That’s not all though, with Team Arrow’s help the Legends of Tomorrow get summoned as well. So how exactly does 2016 have tech to contact time travelers is beyond me. So White Canary (Caity Lotz), Heatwave (Dominic Purcell), the Atom(Brandon Routh), Jax (Franz Drameh), and Professor Stein (Victor Garber) are ready to help.

But it doesn’t end there dear reader. Cisco and Barry go dimension jumping to find the last piece of help. Thus, we arrive to Earth-38 and Kara Danvers (Melissa Benoist). You may recognize her better as Supergirl. It’s an awesome moment when everyone meets up. The moment is punctuated as Felicity is elated and shouts “Best team up ever”! Yes Ms. Smoak, I agree! 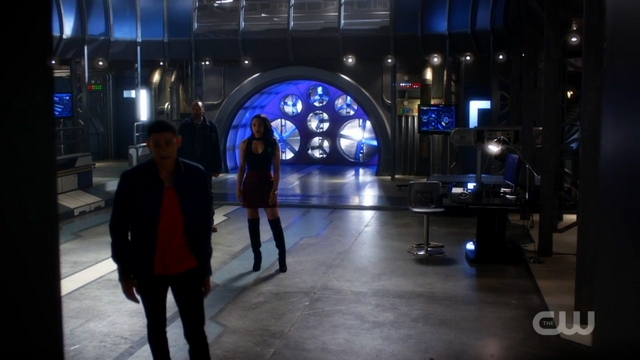 So Barry is named team leader instead of Oliver because the team up was his idea. This is a mark of trust from a friend and other heroes for him. So everyone decides to train against Supergirl, whom Oliver tells not to hold back. Let it be noted she’s invincible, so um you know you’re just going to hurt yourself(and they did). Anyway, the episode also has fun with the super references. The writer’s had fun with the banter and you can tell.

During this meeting of super friends, Iris turns Wally away. She makes a logical case in turning him away with the fact everyone present has been a hero much longer than him. Things turn super serious when the Professor and Jefferson need to speak to Barry. So his future self leaves a warning to not trust him in 2016. So yes, his hand in changing the timeline will affect the lives of his comrades in arms.

Prof. Stein decides to visit home with Caitlin accompanying him. Then things get weird and discovers he has a daughter, Lily Stein (Christina Brucato) now. Eventually, everyone finds out he created Flashpoint and caused changes to the present. So in sweeping fashion everyone loses trust in the team leader. As their called to action to save the president everyone literally turns their backs on him. 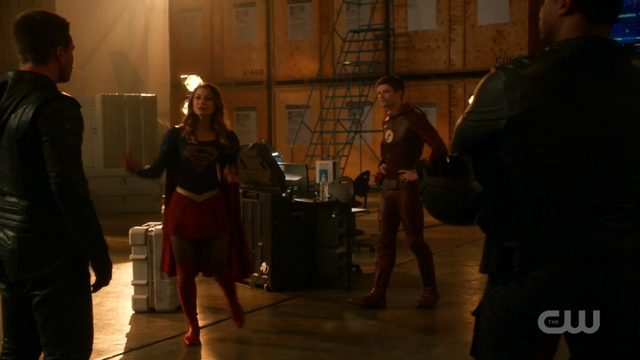 Oliver is particularity stunned and voices his severe concern that they are willing to abandon him. Stephen Amell takes control of the scene as he makes it clear, he would never turn away Barry’s help.

After some awkwardness with Heatwave the team doesn’t save the the president. It was a trap by the Dominators to take control of their minds. While this happened Ollie finds Barry in the time vault mulling over the future. Again, the share a powerful scene. The Green Arrow, tells his friend of the times his parents died and he felt powerless. He admits he would have changed the timeline to save them too. He reinforces that their job isn’t one without mistakes, tragedies, and changes. Honestly it’s a touching moment as one friend shares a moment of weakness to help one through his own.

The bro moment ends as Star Labs comes under fire by the mind-controlled heroes. So once again it’s the Scarlet Speedster and Emerald Archer in a tag team! The fight served to show how proficient and powerful each hero is in their own right. Barry dispatches the atom and Firestorm without breaking a sweat. Oliver is holding his own against, Speedy, Spartan and Sara. However, things aren’t going smoothly so Wally disregards all the warnings given to him. He saves Green Arrow’s life only to be knocked out cold by the maiden of might seconds later. 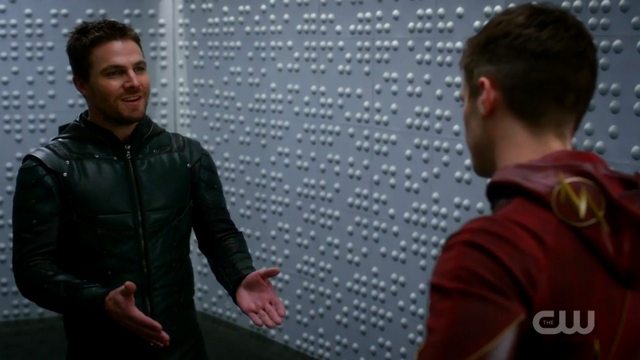 So the team discover the source of the mind control. Oliver  moves on to save himself and the unconscious Wally. Barry goats Kara into racing him to the source of the problem. As Barry zooms through the city, Supergirl is flying on his heels in an impressive CGI scene. Eventually, he uses a well placed speed mirage to have the Kryptonian destroy the mind controlling crystal.

So everyone is ok however the episode doesn’t end well. Some of Team Arrow and the Legends are teleported away. The episode ends on the cliffhanger where Oliver is beaming away, Barry desperately runs at top speed to see his Friend slip through his hands.

The episode is great through and a number of reasons. The highlights of why this was another stellar episode was Barry and Oliver. In the midst of a serious threat and serious decisions their relationship stays the course. Their camaraderie, friendship, and trust is tougher than Supergirl (err maybe not).

The Flash is keep pace with another solid run. This episode was special not just because it was part of a cross over. It was an episode to display the strong bond both he and Oliver Queen share. He maybe his biggest confidant and supporter and it shows.