A Teenage Mutant Ninja Turtles For Every Generation

There’s an old adage, “You’ll always remember your first.” And for me, the first entertainment property that ever captured my attention and my heart was the Teenage Mutant Ninja Turtles. I know I’m not alone in that, for many in my generation, Ninja Turtles was the right property at the right time. And in the 30-some odd years since Ninja Turtles first debut on the small-screen, we have been treated to a variety of new materials whether it be video games, movies, live-action TV series or animated series. And as Nick gets set to embark on another adaption of the four lean, green machine, I wanted to offer some thoughts on the “Rise of the Ninja Turtles.“ 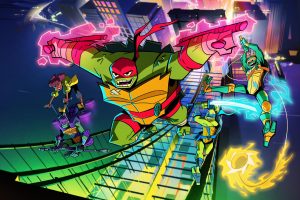 You will hate it at first. Trust me, I’ve gone through this process several times now. I remember when the Fox 2003 series was announced thinking to myself how can they top the original series. Why aren’t they the same voices. Where’s the gawd damn theme song, but that series surprised and delighted me… for the most part. It started to really go off the rails in the latter half of the series with weird, gimmicky season.

Then came the CG series, I will be honest I have a bias against CG animated series. For the most part, the environments are sparse, the characters don’t move nearly as fluid and honestly don’t think it looks anywhere near as good as hand-drawn animation. But time and time again, I’ve been proven wrong on how good it can all come together with the right team and approach. And twas the 2012 Nick Ninja Turtles show, once again showed me I was wrong to pre-judge.

Now this isn’t to say that the “Rise of the Ninja Turtles” will be a good show. Far from it, but it is me trying to tell you to approach the series with an open-mind. It may be different, but can turn out just as special. 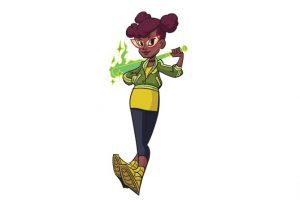 Let’s get the elephant out of the room, April O’Neil will be a young, black girl in this iteration of the animated series. And I know the internet well enough to know that some people’s instant reaction to this will be hatred because… and they’ll come up with a bevy of reasons as to why. To just nip that in the bud, April has been a part of the Teenage Mutant Ninja Turtles’ legacy since the beginning. And the one constant throughout all of that… her name is April!

The movies have also taken liberties with the character, though they tend to stick closely to her reporter origins. Which if you’re a comic purist know was the field created for her in the animated series so can’t even really argue being true to the comics. So her race is just another in the long-list of variations of the April O’Neil character we’ve gotten over the past 30-plus years.

There are other changes as well, most of the Ninja Turtles are ditching their trademark weapons. Though it’s nothing new for Mikey, it will be weird seeing Raph ditch his sais for tonfas sticks though. Leo still wields a sword, but lacks his dual katanas. 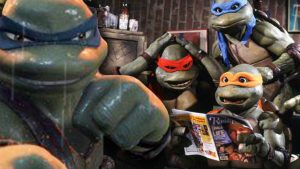 The one constant for the Ninja Turtles is change.

The most glaring change is making Raph the official leader of the Ninja Turtles. While it isn’t a “new” change, it’s something the original live-action movies toyed around with without making it official, it does offer up a new dynamic for the Ninja Turtles. And I am curious to see if they soften up Raph for the role, make the Turtles a bit more hard-edge under his leadership or if it becomes a constant struggle with him and his brothers.

But to bring this all home, the title of the article is “A Teenage Mutant Ninja Turtles For Every Generation,” back in 1987, the Ninja Turtles were exactly what I needed and fit the era they were in. When they revamped the series in 2003 with a better sense of character, story-telling and continuity it fit in with the wave of treating children cartoons like series business especially after the influx of anime. 2012 series rode high on the wave of CG series across the spectrum, but also knew to bring back the zaniness and fun of the original series. Also wise enough to know that the kids who may have grown up with the original series were old enough to have kids of their own who could celebrate in Turtle Dom together.

And now we’re on the cusp of another show that looks at our social situation and see that New York is a very diverse city. It has a lot of strong personalities and it’s bright and vibrant. It’s a Ninja Turtles that this generation needs, and we shouldn’t take that away from them because we dislike this change or that.