Talking of the Town: Wildstar Impressions

I was lucky enough to finally receive a Wildstar Beta code I signed up for months ago.Â  I’ve been tracking the game for some time, and could not wait to get home from work on Friday to finally start my adventure deep within the Legendary Planet Nexus.

As soon as I saw the original announcement trailer I was pumped.Â  It seemed like a Borderlands inspired MMO with similar humour, as well as a similar art style to one of my favourite games.Â  I wish I was more versed in the MMORPG world, however I never really liked the idea of monthly subscriptions, nor do I ever have the time to sink as many hours in as I’d like.

However, right from the get go this game had me, I easily sunk 4 hours into the game the first night I played it.Â  I loved the fact that I could customize my character, not only by race and gender, but I could actually edit dimensions of the face to make my characters unique.Â  Not only will your character look somewhat different from the other players, there’s obviously different classes to choose from. 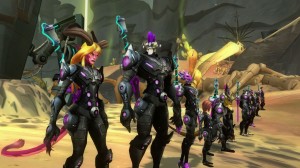 The interesting part was that within each class there was a sub-class or a Path to choose that unlocks a Path specific techniques or items.
The sub-class questing ensured you were always busy boosting your character to make them as robust as possible. 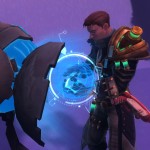 The missions follow suit with the MMORPG genre, kill this, fetch that, talk to this person, but Wildstar had a way on making it feel new. The Kill missions so farÂ don’tÂ require you to kill an insane amount ofÂ enemiesÂ to complete and the enemies, even mobs seem to be a bit smarter,Â andÂ the fetch andÂ dialogue missions are just fun in generalÂ to learn a bit of back story, or talk to characters that are down right hilarious. Â Though the base of the game is pretty familiar, theÂ humour and atmosphere keep you intrigue.Â  I feel like game developers have been beating a dead horse for awhile now with Fantasy based MMOs such as World of Warcraft, Final Fantasy XIV, and now with Elder Scrolls Online.Â  This game immerses you in space and on a mysterious planet called Nexus, a newly discovered planet that two Factions are fighting for control. Â The Exiles, were driven from their home planet by the second faction TheÂ Dominion. Â The Exiles want to assume control of Nexus for a planet they can call home, while TheÂ Dominion fight to rule the galaxy and will destroy anyone who stands in their path to take over Nexus.

Final Fantasy XIV was the latest MMO I spend a lot of time with, and my one complaint is the excruciating amount of reading for story development, and then even more reading for things that didn’t progress the story.Â  It felt like I was spending more time reading than actually playing. A simple fetch quest required about 2-5 mins of reading for very little development.Â  I enjoyed the game play, but quickly started skipping the dialogue just so I could continue levelling.Â  Wildstar is to the point, with small descriptions of what you have to do, why you have to do it, and it’s entertaining.Â  I had multiple laugh out loud moments with funny things NPCs said or some of the mission descriptions. 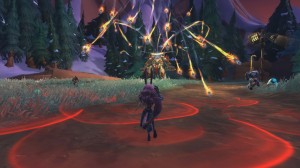 The environments are big and beautiful, I found myself losing track of time from just exploring the world and taking in all the incredible scenery.Â  Some places were beautiful and peaceful as wildlife roamed around, other places were war ridden as multiple races fight to rule Nexus.Â  As with the early levels of any MMORPG it seemed to take forever to travel. Maybe I’ve just been spoiled with my mounts in other games but I always forget what its like to travel on foot. So, it seemed like I spent a fair amount of time travelling between quests.Â  The sights and sounds kept me interested most of the time, sounds of combat, and the species that thrived on the planet running amuck.

The combat was fun, very similar to all other games of the same genre I’ve played with one exception, dodging and manual aiming.Â  It kept me interested in the fights, rather than just spamming attacks I found myself trying to dodge attacks even when I know I could spam kill an enemy within seconds. It was fun, exciting, and necessary to get good at it for later, tougher opponents.Â  I loved the idea of the “loot vacuum” I hate going over to a corpse, right clicking, selecting loot all, its just annoying. Wildstar gets that, so when you kill a huge group of baddies rather than looting them individually, you just press “V” and it sucks all the loot to you, amazing! It was extremely rewarding to level up too, bold and flashy LEVEL UP pops up on the screen, and the narrator says some funny catch line like “OOOOOH $#!@! you levelled up” or “OH SNAP. that was $#%@ing awesome”. 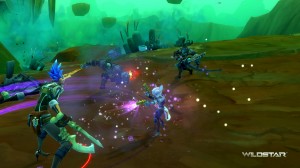 I realize most of this will be fixed, and I have come to expect bugs with beta testing.Â  However, here goes, If you don’t vacuum up your loot, the message will stay on your screen until either you find where you missed it or the loot disappears, which seems like 5-10 minutes.Â  Other messages would pop up in the middle of your screen and just stay there until a cinematic.

Although I tried to do as many missions as possible, sometimes I felt overwhelmed by the amount of steps I had to do with one mission or path task. Sometimes it took too long to complete a mission by either multiple steps, or long travel with little payout.Â  The Mission tracking was sometimes off, and the tracker would often lead you into the middle of nowhere when the objective would be on the other side of a mountain.Â  There were some odd crashes, again expected with Betas, so I wasn’t too unset about it.Â  The HUD is customizable, but I found it a bit confusing at times and sometimes lost sight of how much health I had left.

But the ugliest part will probably not change, the price. It’s $59.99, or $74.99 (deluxe edition) with 30 days free and then $14.99/month after that.Â  I was expecting a $29.99 or $39.99 much like other competing subscription based games, like Final Fantasy XIV. There is a way to play for “FREE” they say. The way to go about that involves exchanging in game gold for C.R.E.D.D. sold between players which can then be used to purchase your subscription.Â  C.R.E.D.D. can be purchased for real money from the Wildstar website, and whenever you have any extra you don’t need, you sell it for in game gold.This is an interesting way of paying for your subscription, however, where you’re exchanging with other players, we all know, other players are greedy and want to get as much gold for what they’re offering, refer to the Diablo III auction house.Â  In saying that, I feel that players will be able to control how much the sell the C.R.E.D.D. for, ultimately leading to an absurd amount of game play to earn your free month.

Despite having a load of fun with the game, I don’t think I’ll be picking this up at launch, its pretty pricy for a subscription based game out of the gates.Â  However, I’d like to wait and see how the “play to pay” business model works.Â  That may change my mind if C.R.E.D.D. is actually attainable using in game gold without quitting my job, moving into my parents basement, and devoting my life to gold farming just to pay for my subscription next month.Â  Happy gaming to all of you, and for more info on Wildstar, check out their websiteÂ http://www.wildstar-online.com/en/.