Talk of The Town: Batman Assault on Arkham

Whether or not intended for general viewing, the trailer for DC’s next next DTV (Son of Batman is due out in a few weeks) is up on Youtube. Batman Assault on Arkham will serve as DC’s 21st original animated film and who knows how many starring Batman!

The film will be the first to tie into another universe as it shares the same universe as the Batman Arkham-series of games (though a case could be made for Justice League: Crisis on Two Earths being a part of Justice League/Justice League Unlimited). What is most exciting about this project is it will be the first original storyline in more than 3 years (since Green Lantern Emerald Knights), while I appreciate DC’s adaptions it is always nice to get new stories and be a little surprised! 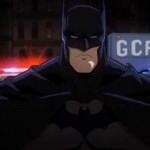 Even more exciting since this is tied into the Arkham-game verse we get the return of some popular voice actors. First, and always most importantly, Kevin Conroy will reprise his role as Batman for the film, the first time he has done so since his stint in last summer’s Justice League: Flashpoint Paradox (Though he wasn’t the film’s main Batman), CCH Pounder will reprise her role as Amanda Waller a role she played on Justice League Unlimited, surprisinglyÂ Hynden Walch will voice Harley Quinn a role she had on The Batman, just surprising they went to her over Tara Strong from the actual games. The Joker sounds like Mark Hamill, but based on his performance in Batman: Arkham Origins, we’re going to assume it is Troy Baker since Hamill has reportedly resigned from the role.

In addition to Batman, The Joker, Harley Quinn and Amanda Waller, the movie will feature the Suicide Squad! The first time they’ve been included in a DTV. In this film, the Squad consists of Harley Quinn, Deadshot, Killer Frost, Captain Boomerang, King Shark (who doesn’t seem to be an actual shark) and a final member we can’t quite place (though it looks like Black Spider or Black or Talon). 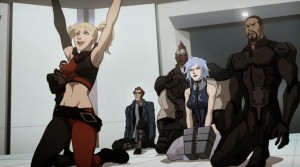 Speaking of the game, the movie seems to borrow heavily from the game’s aesthetic designs. Luckily for us, while it uses the art from the game’s world, it doesn’t quite go for the big, bulky look that the game’s tend to have. Instead, we get a nice clean-look that is different from recent DTVs.

From what we’ve seen, this seems to be a most interesting project. While no release date was giving, we would peg this for a late September/early October release date. More information as it follows.