Wow, its been almost 24 hours since we last introduced a new idea! I was beginning to get worried there. So welcome to the first (and boy do we say that a lot) installment of Talk of the Town. Like most things on this site, it is a work in progress idea, but it will generally be used to highlight upcoming nerd-related things we are interested in. Think of it as our version of a preview except not always hands-on, or pre-screenings, just generally impressions from whatever media is out there.

This inaugural edition will deal with, what I personally think is the most intriguing downloadable game for the rest of the year, Retro City Rampage. As I’m sure many have realized, retro is in whether its MegaMan 9/10 kicking it old school with 8-bit sprites or the Rebirth series such as Castlevania, Contra and Gradius on WiiWare, what old is new again. Enter Retro City Rampage, which is a game that goes retro (if the game’s title didn’t give it away), but in the most unique way.

Think of Retro City Rampage as the video game equivalent of The Expendables, a throwback to everything that was great about the 80s rolled into one neat package. As you will see in the trailer below, it is a love letter to games on the NES as well as the culture of the 80s.

As you can see from the trailer, the game takes its nods from the Grand Theft Auto series (originally the game was titled Grand Theftendo) which makes perfect sense. The open-world structure allows for various sight gags (which we will get to in a moment) as well as serving as hub of sorts for the various in-game homages.

But let’s break this down a bit more, here are just a few of the nods that you will find in Retro City Rampage.

This game will not only pay homage to the games of the 80s, but also the movies and culture of the time. As you can see above, Pie Hard (Yippee Kiyak Mother Bake is an awesome catchphrase by the way) is a reference to one of the greatest action movies of all time, Die Hard, and I’m sure there’s probably a John McClane pie hiding in there some where. Maybe a John McClaire (okay its a bad pun, sue me) 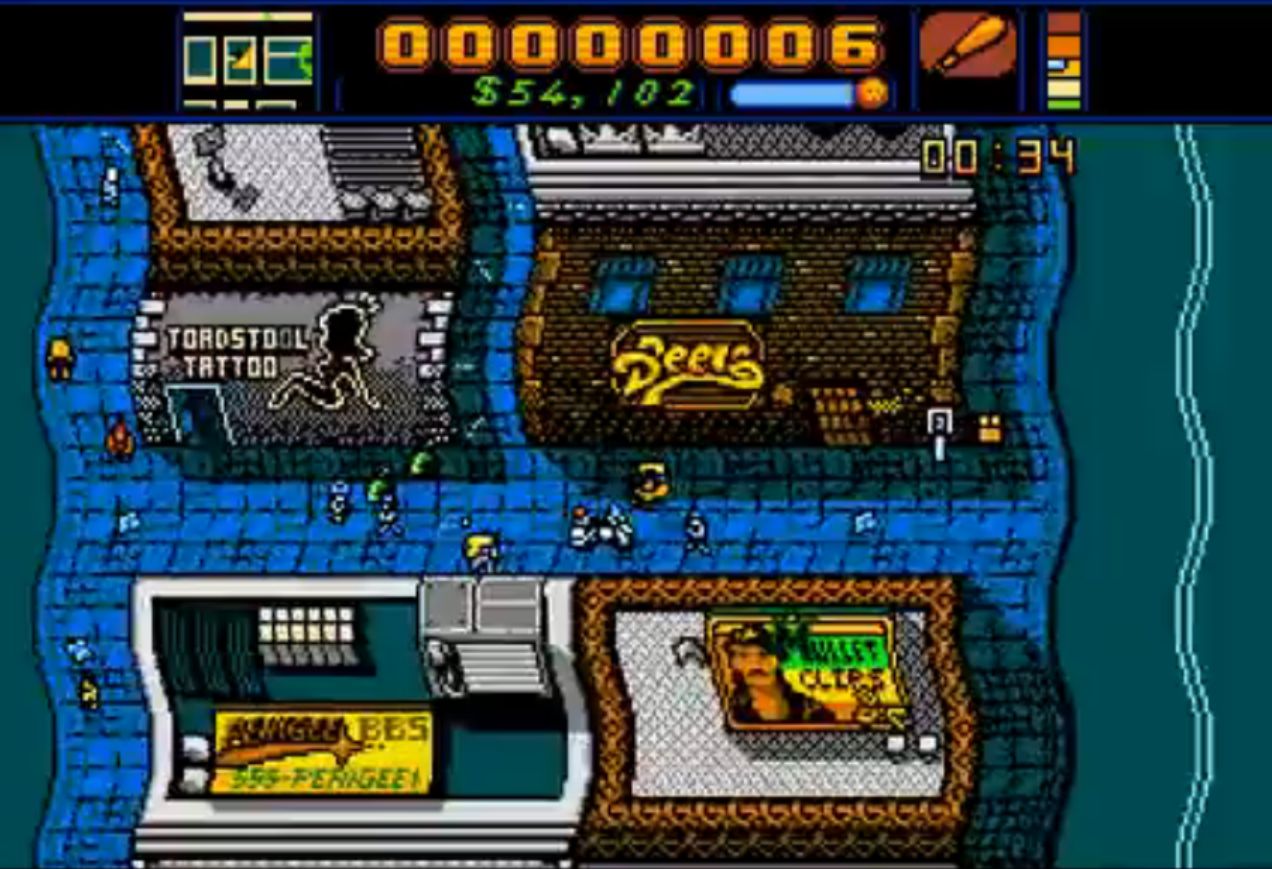 Here is an example of both game and pop culture references. As we have Toadstool Tattoo with a silhouette of Mario’s main quest Princess Peach Toadstool and Beers, which appears to be a bar that pays homage to Cheers (from the name and the font) And of course, what would the 80s be without getting your mullet! 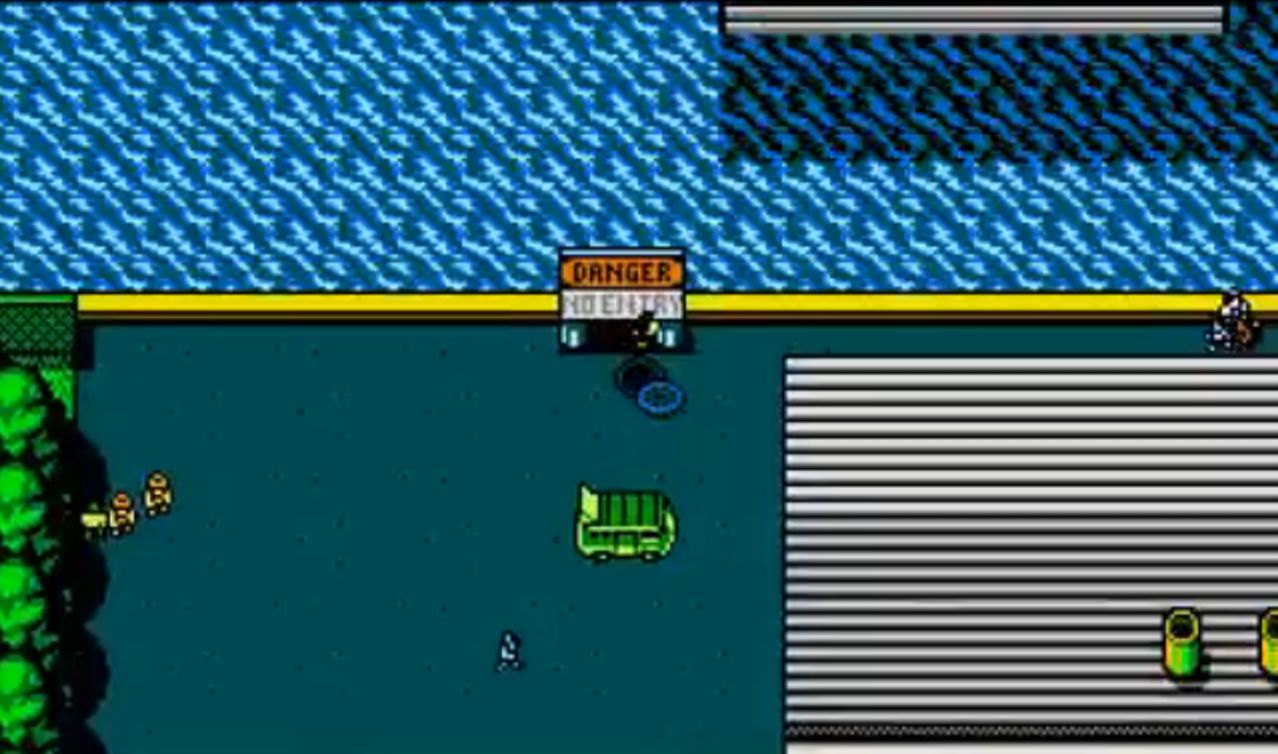 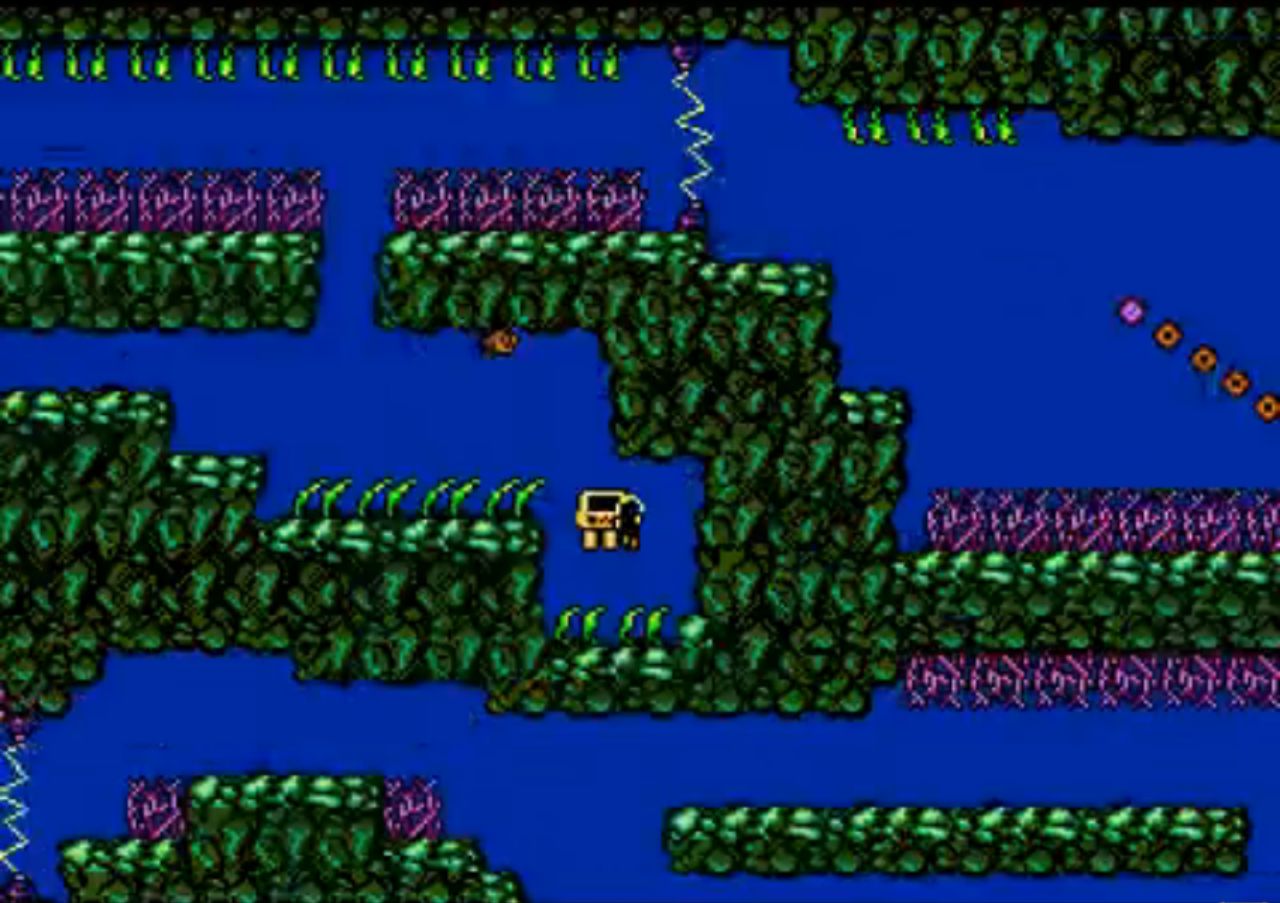 Here are two examples of one of the 80s most enduring series, and one that is personally near and dear to my heart, the Ninja Turtles. In the first screen, you can see that the Turtles van is one of the many vehicles included in the game (others included a Yoshicopter which looks bad-ass) and of course the bottom screens shows one of the most infuriating levels in any video game ever created. I still get nightmares of this ghastly ordeal. I hope this game does the level justice, but making it FUN this time as well.

Just because I love it so, here is the abridged version of the Teenage Mutant Ninja Turtles intro, apparently the complete track is banned on Youtube which kind of sucks. 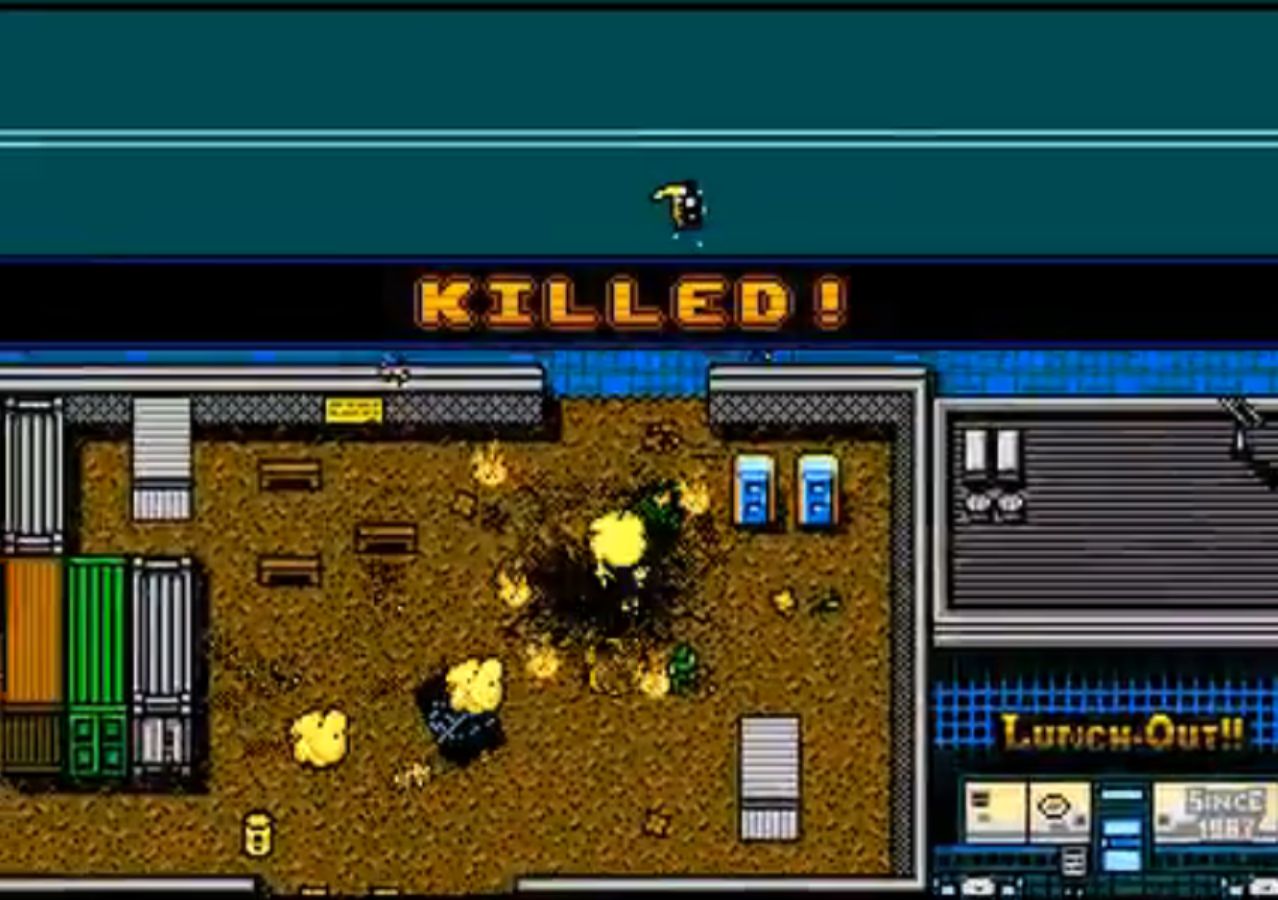 Getting back to the game, we once again come across a reference to a game that was popular in the 80s. Sadly for me, I never got into the series until the newest version on the Wii, but Punch-Out is one hell of a game. On the left of the screen, you also see.. well aside from your character pulling off a Kamikaze maneuver another parody of popular NES games.

Now WonderHats is an interesting one. It of course relates to ThunderCats, but how they got a hat store from the series I don’t know. Then again, they did turn Die Hard into a bakery so how can I complain now. More importantly, Vanilla Ice Cream with the most remarkable ice cream cone mascot ever. Vanilla Ice Ice Ice Cream indeed.

On that note, I’m curious how the music will operate in this game. Will it be remixes/variations of popular video game music, will it be music from the 80s? Will music function like in the GTA series with different stations while driving. Who wouldn’t love to hear a chiptuned version of Ice Ice Baby or Can’t Touch This. I’m drooling just thinking about it. 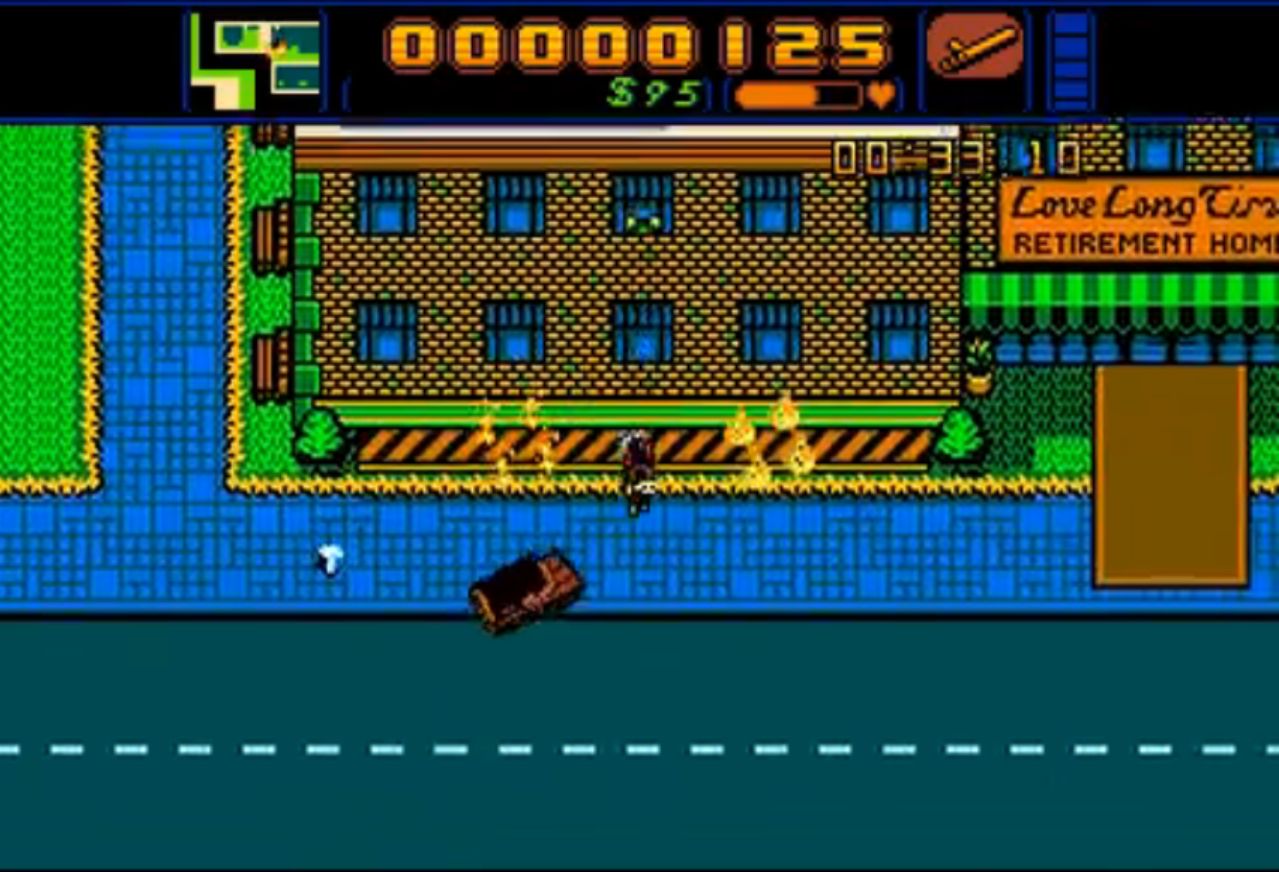 First off, I would like to apologize, I couldn’t time the screencap properly to get the full image so yes I realize it says Love Long Tim, which takes on a whole different meaning, but the retirement home is actually called, Love Long Time, which is just an awesome name and reference.

So those are only a handful of references, nods, and parodies to be found in Retro City Rampage. I for one can’t wait for more information on the game. And a solid release date would help. As it stands now, it will be released on WiiWare sometime this fall. So check out the official site, and re-watch the trailer to spot any references you think are awesome.