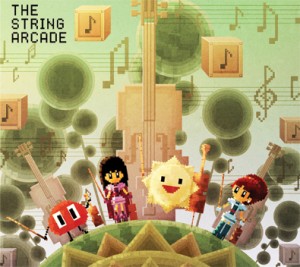 First off, I must say, I was quite impressed with this album. Not only does it include some classic tracks from some of your favorite games (Such as Sonic The Hedgehog 2, and Galaga) It also incudes a few newer favorites as well, such as Plants vs. Zombies and Portal 2.

Coming from a guy who just about solely listens to EDM (Electronic Dance Music) the first time through the album, I really didn’t know what to think. I gave it a solid week of listening before coming to my conclusion to give it a fair shot. The more I listened to it, the more it started to grow on me. This completely string orchestrated album stays true to its name and has some great arcade/gaming tracks that are an absolute delight to listen to. Interestingly enough, I generally like originals much better than remakes. In this case, I was quite accepting of the refreshing versions of tracks, even with out the percussion, or crappy audio quality that resides in my heart from some of my favorite games.

My favorite song on the album, would come from one of the few mobile games I play, Grasswalk from Plants vs. Zombies. Its intriguing to listen to a track that I know all too well from playing hours, upon hours of PvZ. I really enjoyed the aspect of this track being reimagined as a genre of classical music. One of my least favorite songs on the album, was actually the one I’m most familiar with, The Legend of Zelda Title Theme. I guess I was expecting the song to follow suit more along the lines of the original score. I was expecting it to be upbeat and exciting as I picture Link dashing his way through the over world. However, without the percussion, I felt the life of the song was a bit drained. Now, being the last track on the album it was probably intended to align with the albums progression, and bring the album to a slow, and calm close.

So if you’re a gamer this album is a great addition to your ever growing library of music. Plus when you purchase the album, is supports a great cause, all profits from album sales will be donated to The Alameda Music Project. Check it out, album drops March 7, 2014, happy listening.