Review Shooter: Star Wars: The Lost Tribe of the Sith 1 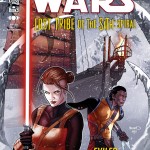 Dark Horse is releasing a new series showing a whole new story on the history of the Lost Tribe of the Sith. With said history spanning from Old Republic times all the way to skirmishes with Luke Skywalker, there’s a lot of room to tell some interesting stories about this rather unique tribe. John Jackson Miller is on script, as you’d expect, considering his extensive experience penning previous Lost Tribe stories. The creative team rounds out with Andrea Mutti on pencils, Pierluigi Baldassini on inks, and (the prolific) Michael Atiyeh on colors.

Despite having rather respected names on the creative team, I’m a bit underwhelmed by the art. The frames are very standard and don’t really feel dynamic at all, although there alsoÂ isn’tÂ a ton of action in this first issue. The inks are harsh and kind of an odd dichotomy. Areas with low shadow, like faces or light backgrounds, display very sparse ink, almost making it seem as though it lacks detail. Shadows however, are very thick and make for an awkward transition from the dark to the light. The scenes themselves are well conceived and do have some interesting angles, on the other hand. Colors are passable, but definitely not as outstanding as Atiyeh sometimes performs. 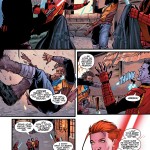 The story is one that I definitely find interesting, though. For those unfamiliar with the Lost Tribe of the Sith, the basic idea is that a ship of Sith have crash-landed upon a world. Once there, they use their Force powers to convince the locals that they are gods, and then set up to rule over them. The most interesting part of this is how differently the Sith evolve here, separated from technology and, therefore, the rest of the galaxy. Their culture mutates into a meritocracy, which is a very new take on the way Sith organize themselves. From one master and one student to the many Sith organized by Krayt in Legacy, there have been very disparate ways that Sith have lived. The near-democratic meritocracy set up in these stories adds a whole new type of cultural construction that is definitely entertaining to see in action.

This arc starts after the original crash and puts us into a status quo of the Sith society on the planet, so we do just jump right in. The various characters are well-conceived and seeing them interact is quite the pleasure. All Sith, but many different dispositions and ideas of what that means make the read dynamic and gives it a very tangible sort of quality. You can see the different forces pushing and pulling in each direction, all using the idea of “Sith” to justify those choices. However, being an inaugural issue, there isn’t a huge amount of action. This is expected since the reader needs to get acclimated, both to the general idea of the story as well as to the various characters we will get to know. That’s not a bad thing, just don’t expect there to be a ton of immediate Force choking going on just because it’s Sith-based.

Recommendation: Buy It– Overall, it was quite an enjoyable read and I highly recommend it as a breath of fresh air what can sometimes be the cluttered canon of Star Wars stories. I’m looking forward to where it goes from here.