Star Wars: Darth Vader and the Cry of Shadows #5 – Review 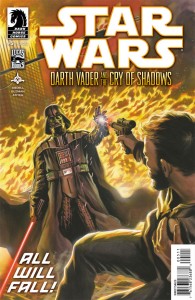 Greetings, fellow dork balloons. This week brings us the conclusion to Dark Horse’s Star Wars: Darth Vader and the Cry of Shadows limited series with its fifth issue. While the series got off to a slow start, it’s proven to offer some significantly more adult scenarios and general themes than we tend to see in most Star Wars these days, which is something I always enjoy. That said, let’s dive right into the review and talk some about why that is and to what degree it was successfully accomplished.

The creative team remains the same, which shouldn’t come as any surprise. The inks are heavy and are also accompanied by a lot of cross-hatch shading, which makes for a rather dark book. That’s actually quite fitting, considering the subject matter, and I think that compliments the story well. The colors are executed satisfactorily, as they do not become overused, even amidst long sequences of pages with similar palettes. Fighting and explosions on a desert world don’t leave a huge number of color options, but Atiyeh does well to vary the landscape and use some soft gradients to break up monotony.

The frames themselves aren’t terribly unique or dynamic, although they do offer some departure from basic rectangles and squares, which adds some measure of energy to active portions of the story arc. The perspectives in each page are often unexpected or at least not standard, and this helps to give the art a more erratic feel (in a good way) than simple side views in sequence would offer. Despite the rather uninspired nature of the frames, however, the actual content of the art is quite the opposite.

The degree to which the art has been tied to the story is one of the things from both this issue, as well as the arc as a whole, that stood out to me. Juxtaposition is used frequently to relate the narration not only to the direct topic, but to alternative subjects. Hock (our “protagonist”) describes a worn-torn city as “barely recognizable” at the same time his beaten face is mirrored in shards of a broken window, for example. This is particularly important in this story arc because of the impact that context brings to ideas.

In the end, that’s really what the whole arc is about; separating truth from fiction, honor from dishonor, and loyalty from cruelty by viewing the situation as a whole, rather than a piecemeal set of facts. The entire story is comprised of juxtapositions like this, both in moments as well as themes. How far down the Empire rabbit hole does Hock want to go? How far down is too far to turn back, and has he crossed that Rubicon yet? Once those answers are revealed, compare those results with Vader’s own story and see just how similar they are. 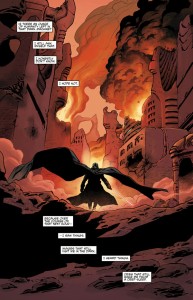 The story pushes a lot of difficult questions at you, and includes a lot of cruelty. That said, it’s hard to forge strong senses of purpose and flesh out themes of right and wrong if the most dramatic thing that happens is a minor outburst after a lost game of Tiddlywinks. I don’t want to give too much away, however, as it really is quite an enjoyable read. Although the subject matter is darker and more nuanced than your average Star Wars comic, I wouldn’t say it contains a lot of surprises, but not every story needs twists to keep the momentum going. If you’ve already read one through four, there’s absolutely no reason not to pick this up. In fact, if you’ve read none of it, I’d highly suggest purchasing the entire series, especially if more mature themes are something you appreciate in comics. Here you’ll find no Jar Jar shenanigans (thank god) to break up the intensity of the arc, no R2 bleeps to bloop in the humor, just the examination of a question which I think is at the very core of the Star Wars universe: can one find salvation?