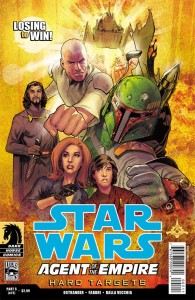 This week includes the conclusion to Hard Targets, the second limited run in the Agent of the Empire series. The same team is on the task as the previous four issues, with the prolific Mr. Ostrander on script, Fabbri on pencils and sharing art with Vecchia, and Dzioba on colors. The previous four issues have, in my estimation, pulled together a rather mundane set of circumstances thus far, and I was really hoping for something exceptional to tie it all together. Agent of the Empire is often pushed as a “James Bond of Star Wars” theme, and in some ways it is, both to its detriment as well as its benefit. On a macro level, if there’s one thing I can say about this issue as well as the series as a whole, it employs methods that are very much hit and miss, and it does plenty of both.

The art has remained consistent, for what that’s worth. It uses a good number of angled or irregularly shaped frames, which sometimes works… and sometimes is a distraction. The same is true of some non-standard points of view, as it frequently fits well with the tone of the moment; well, at least as frequently as it throws me off and I’m jarred out of the immersion to some degree. The inks are relatively sparse and the pencils seem a bit busy, but that’s more for my tastes than something actually off about them. The colors are probably the highlight, although there seems to me to be just an oddly large amount of white space in many of the pages; mostly the background behind the frames, but the comic’s entire first half is all just white backgrounds, which I’m not really ecstatic about.

The story holds up a little better for me. The previous four issues kept me interested enough to read the next in line, but I never really was particularly looking forward to their release days. Now that issue five has come around, my interest had waned some and I was relatively skeptical that it would be able to pull the threads together in a believable way that made an interesting conclusion, as well as one that justified the time spent reading the rest of the arc. For the impatient among you, let’s answer the big question: did issue five make a grand turnaround for the arc? Did it really give Agent of the Empire the James Bond-inspired feel it aimed for and weave a believable mystery? The answer to these questions is a resounding “kind of.” You’re welcome for that.

Just as with the art, the spy story feel that the arc aims at ends up hit and miss. It definitely feels more mature than some other Star Wars titles, including concepts like self-sacrifice, assassination, innocents being injured or killed, and so forth. I think that approach is definitely necessary, and likely needs to be pushed even further to really add some risk and weight to what hangs in the balance. Generally, that’s what you see in spy stories; there’s something that desperately must be overthrown, or calamity will ensue. The stakes in this arc are less dramatic. A jerk may rule in Count Dooku’s place, and it’s possible civil war would start as a repercussion. However, this is never really pushed home, never made an example of, and it rather just sits in the background as a vague and poorly-looming threat. On the other hand, a spy story also tends to have plot twists and movements made behind the curtains, leaving the audience wanting for important information until it all ties together in the end. That, I’m glad to say, was done better than the former in this concluding issue. I reached the end and was pleasantly surprised by how well it did tie things together. That said, I didn’t have terribly high expectations, and it wasn’t the most masterful of literary traps, but I was satisfied.

That’s really going to be the takeaway from all of this, both in terms of art, in terms of story, and in terms of how well this limited arc represented a spy story in the Star Wars universe; it’s satisfactory. Considering my quite poor opinion of the introductory arc of Agent of the Empire, I’d say this is a significant step in the maturation of the title. It’s still not what I’d call a “must buy” by any means, but if you like Star Wars and spies, you will be satisfied by this title.