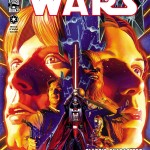 This week graces us with the launch of Star Wars #1, which is one of the last new SW runs we will see from Dark Horse. After years of running the comics side of Star Wars, Disney will be taking over shortly, so I was quite anxious to see what DH would offer us as its time with the title wanes. Prolific heavy-hitter Brian Wood brings us the script, D’Anda is on art, and Eltaeb finishes up on colors for this issue.

Before we jump right in, I’d like to make a note that when I opened the comic up to begin reading, I wasn’t exactly sold. We are going back to a very popular time in the Star Wars timeline, filling in some information right after the Alliance victory at Yavin. We are talking about Luke, Leia, Han, Vader, Sidious, all of the really big names, so it’s a gamble to go back now and try to write new stories with these characters. The potential for producing something pretty awful is not only possible, but threatening, and if we run into any more clones of the Emperor, I might just flip a table.

With the concerns I had upon beginning the book now noted, let’s move into the art itself. The comic mostly uses standard rectangular frames. There are rarely some limbs at an odd angle or some overly-busy inks. Well, that’s it, that’s all negative I could possibly say about the art. The frames are filled with great angles, wonderful zooms, they match the tone of each moment wonderfully, and are beautifully drawn. The colors are outstanding and vibrant, leaving nothing flat and also nothing overly-complex, but always adding great, warm tones and engaging plays with additional shading. I’m a story-driver reader and that’s what generally drives my focus when I read comics. While I love art, I am terrible at it and am more likely to focus on the story since that’s something I feel I have a better understanding of. I rarely stop in a book and just look at the art in awe at how intrinsic it feels to the sense of the book, and this exact rarity occurred many times in this issue. 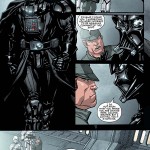 Okay, let’s take a break from me going on and on about the art to take a look at the story. As I mentioned towards the beginning, handling popular characters and adding new stories to their lives is a dangerous thing. Many people absolutely love the characters and the Star Wars universe, myself included. So, in consideration of this book, it’s important to note the following: 1) Wood uses “literally” twice (a pet peeve of mine) and I only believe one to be used correctly. 2) Luke is quite whiney for the first few pages (not really a fault, he’s always been whiney). And now I’m done with anything negative to say about the story. Just as the art portrays the familiar characters in much the same way they look in our memories, the script describes them in the same ways that you will remember. Luke is whiney, but he comes in when he has to, Leia is a total bad ass, Vader is conflicted between anger and shame after Yavin, the Alliance struggles as Mon Mothma strains to keep everything together, the whole book is filled with nostalgia for the period the book is focused on.

I think my stance is pretty clear on this one, so in the spirit of not ruining anything, let’s just end it here. I really can’t say enough good things about this book. If you enjoy Star Wars at all, this is a must pick up. Stop reading and go get it, like right now. As for me, I’m off to give it a fourth read.