While watching The Living Daylights the other night, a curious thought crossed my mind. In the span of nearly 50 years, some 22 movies and 6 main actors, there has been a plethora of women in the Bond franchises. Some have aided Bond in his quest, others have attempted to murder him and some existed for the sole reason of being offed during the movie. While those who are killed during the course of Bond’s journey are mourned temporarily, we don’t actually know what happens to the dozens of other women who survive their encounter with Bond.

That’s why we here at Nerds on the Rocks have done some of the finest, fictional journalist investigation known to mankind to bring you these updates on various Bond girls.

And we christen this segment with an update of the original Bond girl, Honey Ryder, from the film Dr. No. As a refresher for those who haven’t seen the film in some time, Honey Ryder makes her debut arising out of the water with the sun at her back. One of the more memorable scenes in the storied franchise’s history. The film ends, as would become a tradition, with Bond making out with Honey Ryder on a tiny boat as he detaches the toil cable for some private time. 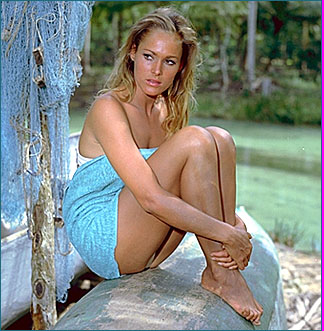 The question then becomes what happens to Honey Ryder after her little love boat with Bond? We never hear her name uttered again throughout the course of the franchise.

One theory out there is that after Bond finished having his way with Ms. Ryder, he got rid of her. The ocean is a big place to comb and she had no living relatives. There really wouldn’t be much of a fuss looking for her. The perfect crime as they were to say.

We didn’t believe this theory, not that Bond hasn’t killedÂ andÂ he isn’t against killing females, but there really was no motive for this. We did a little digging and discovered that Bond dropped Ryder off on the coast of Jamaica before being summoned back to MI 6 headquarters for another debriefing (this adventure took place between the end of Dr. No and the beginning of From Russia with Love.) Bond promised Honey that he would return to her after his mission was complete.

We then hear of a tale that has been passed down through the ages of Honey combing the beaches of Jamaica in search of sea shells. She, as the legend goes, wanted her beloved James to have the most complete collection in all the worlds when he returned. She wandered the shores day after day, turning down dozens of suitors in pursuit of her one true love. But he never came back. She waited and waited, but there was never any sign of him.

Finally, after years of waiting. Ms. Ryder died on the beaches she loved so much pining for her lost love.