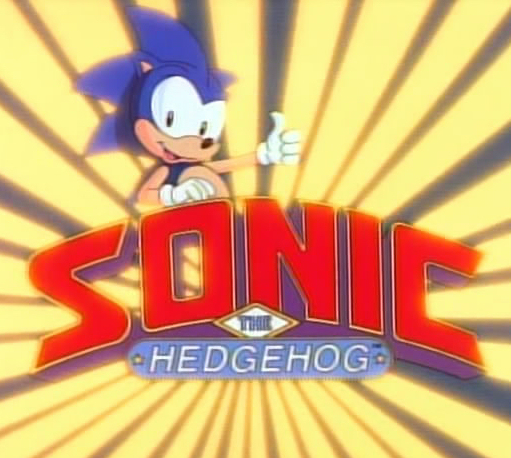 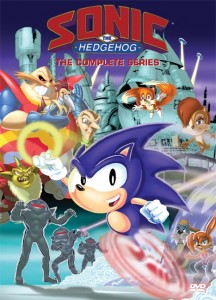 The show opens with Dr. Ivo Robotnik, voiced Jim Cummings, returning to Robotropolis, with his lackey Snively,Â playedÂ by Charles Adler, welcoming him back. The freedom fighters have been fighting the despot for some time. He has many ofÂ theirÂ loved ones enslaved alreadyÂ in a Â roboticizedÂ state. 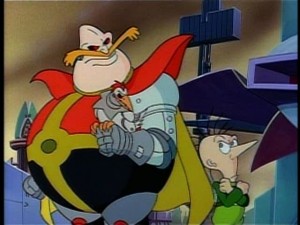 We’reÂ introducedÂ to Sonic, Played by Jaleel White, Tails, Played by Bradley Pierce, And Rotor Played by Cam Brainard. Sonic is a freeÂ spiritedÂ guitar rocking, dude, Tails is a young kid fanboy and Rotor is a laid back tech head. Â  One thing that is a little weird, is Sonic doesn’t blink or have Eyelids. His pupils blink.

Robotnik also has manyÂ surveillanceÂ droids floating around and spots Tails.Â He proceeds to send a buzzbomber robot to pursue Tails. The Bee shaped badnik is destroyed by Sonic and they see theÂ surveillanceÂ bot and tease Robotnik for his failure. The trio then goes to Knothole,Â theirÂ base of operations.

While in Knothole we meet the other freedom fighters.

Bunnie Rabbot- A half Robot, Half Rabbit powerhouse with a southern twang, voiced by Christine Cavenaugh.

Princess Sally Acorn- The Freedom Fighter’s field leader, and brains, voiced by Kath Soucie. It should be noted, that Princess Sally’s design in the pilot is different than the rest of the series. 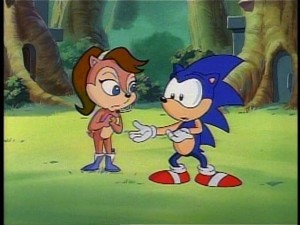 Also, there seems to be a bit of a love triangle between Antoine, Sally, and Sonic. The sub-plot between them is kind of interesting.

It seems the Freedom fighters have a problem. The cotter pins in the catapults they use to defend Knothole Â keep breaking, and need to be replaced with metal ones. Â It’s Decided that Sonic needs to go to Robotropolis to get them, but not before getting a Power Ring. Â 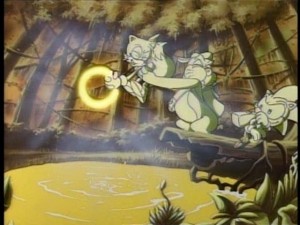 Power Rings, invented by Sonic’s Uncle Chuck, give Sonic a boost. They also have a lot of other effects depending on how you use them. Robotnik is also after them. Ivo knows the Freedom Fighters have them, so he creates a chemical that can intantly kill trees and expose Knothole. Robotnik knows Knothole is in the Great Forrest, but has yest to find it. He then loads up a bunch of buzzbombers with the chemical and charges Snively with the operation.

The attack happens after the catapults are fixed. So, Sonic Leads the Buzzbombers into range, and the day is Saved!

Being a Pilot, a lot of theÂ designsÂ weren’t finalized yet. Sally’s Design was the most obvious, but the look of the technology, and someÂ vehicles were streamlined in the following episodes. Â I don’t think they did a bad job at introducing the characters and their motives, but the plot was kind of weak.Â Â Â Â However, with all the exposition in thisÂ episode, it was kind of expected. 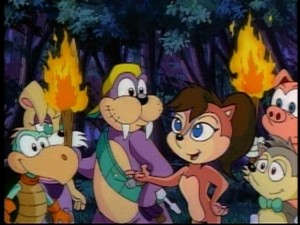 Until next time, stay Way past cool!