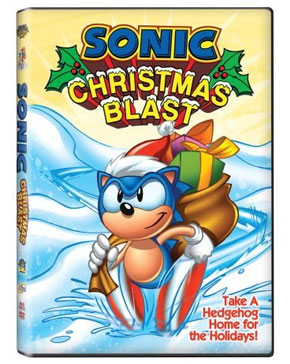 “Adventures of Sonic the Hedgehog” was a daily cartoon that was made roughly around the same time as the Archie Comic, and the Saturday Morning cartoon. The animation was sub-par, there were Lame puns abound and annoying Badniks,Scratch and Grounder, are the main complaints I have with the show. But, in the Spirit of Christmas, I present to you the Holiday Special:

This is the only “Adventures of Sonic The Hedgehog” episode with Princess Sally in it. She plays a rather large roll however, in the Saturday Morning cartoon, commonlyÂ referredÂ to as SatAM. Oddly, she is pink and has her SatAM design in this cartoon. Â So I’m not sure her design wasÂ finalizedÂ when this was made.

This special really doesn’t have much to do with Christmas, in my opinion. Also Robotnik is kind of a retarded Grinch or something in this. It’s sad, because even when this originally aired, I knew it was not as high quality as SatAM was. Â OK, enough of me being a Scrooge about it.

Hope you enjoyed it, and I hope you have a merryÂ Christmas!