Sonic Saturdays: The Beginning (of the comic anyway) 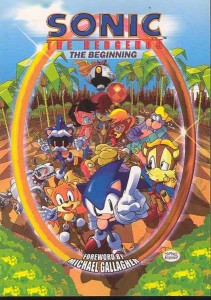 Back in November 1992, Archie Comics began publishing Sonic The Hedgehog in a limited mini-series. It ran toÂ FebruaryÂ 1993, and was four issues long starting with Number Zero. Â Deryl Edelman, Â at Archie comics had just landed a gold mine of a property which was also beingÂ developedÂ for Television by DiC Entertainment. Many of the characters would be in both the comic and the show. I will blog more on the show later, but this one is dedicated to The Beginning.

The typical format of the old comics was three short stories per issue. Sonic was a wise-cracker. A lot of really bad Puns and visual gags were used. Â They also tried to add as many of Robotnik’s Badniks from the Sega games as they could. Another thing they used to do is use power rings. The power rings had the ability to give Sonic a speed boost, They used that in the Saturday morning cartoon as well. Â The comic and the show had been in production at roughly the same time.. The show began airing a little after the first few books were published. It was also more seriousÂ comparablyÂ speaking. There was a weekday show as well, known as “The Adventures of Sonic The Hedgehog” that was more Punny.

The basic Formula for this comic is was this: Dr. Robotnik has hatched (see what I did there?) an Evil plot and It’s up to Sonic and The Freedom Fighters to stop him! 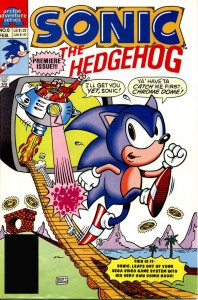 As for the characters, well First there’s Sonic. He’s very impulsive, has super-speed, and attitude to spare. In The Beginning, he tends to do a lot of exposition, and sometimes breaks the fourth wall. Sonic Loves Freedom, speed, and Chili-Dogs. Â He is also the only one who can use the Power Rings, that his Uncle Chuck has invented for him. 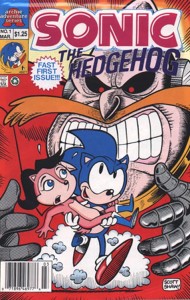 Then comes Dr. Ivo Robotnik. He has taken over much of Mobius, the planet they all live on, by using his Robot Badniks. In “TheÂ Beginning” they never really delve into his back-story. While he is evil, He’s really not much of a threat himself. In these early works, he can be downright goofy. Robotnik lives in the city of Robotropolis. Â In the Saturday morning show He was much more of a threat. He has an assistant, who is also his nephew named Snively. 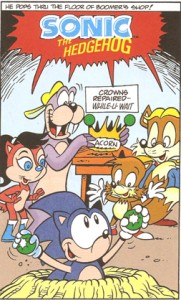 This brings us to the Freedom Fighters.Â First up is Princess Sally Acorn. She may be a princess, but she’s also The Freedom Fighters’ field commander, and main strategist. It’s also heavily implied that there’s a sub-surface love between her and Sonic. Oddly, she went through some, unexplained at the time, design changes. Â This character was also one of the few female characters that were on equal standing with the hero of the story. Even as a Princess, she didn’t really need saving all the time. She is also Looking for her lost Father. 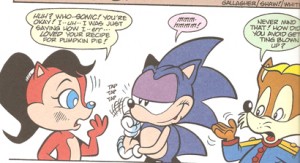 Tails, also Known as Miles Prower is Sonic’s biggest fan. He is sometimes shown as a bit insecure. He spends most of his time saying how cool sonic is. That’s about the extent of his personality in the beginning of the comic.

Antoine D’Coolette Is a cowardly French coyote character that is also a rival to Sonic. He pines for Princess Sally’s affections. He’s also part of the royal guard, and an expert swordsman. IN this mini-series however, he’s the butt of a lot of jokes. Antoine is kind of an anti-sonic but they putÂ theirÂ differencesÂ aside when it matters.

Finally we have Boomer AKA Rotor. This walrus is an inventor. He’s also rather laid back and likes to eat.

The art in the early works is cartoony, yetÂ consistent. Most of it is by Scott Shaw and/or Dave Manak. The overall look is kind of expected, seeing as all the main characters are furry little animal people. Well, outside of Robotnik and Snively. Â The stories contained in this volume are also “One and Done” with very little continuity to follow. Â The comic came out shortly after Sonic 1 did, so I think itÂ was a good idea to add elements, and the badniks from the game as well.

As of this article Sonic The Hedgehog is on their 229th Consecutive issue, has two on-going series, and an oversized Magazine coming soon. Not bad for a Kids book!

Sonic The Hedgehog: The Beginning is available from Archie Comics, Your Local Comic Shop, and Online.