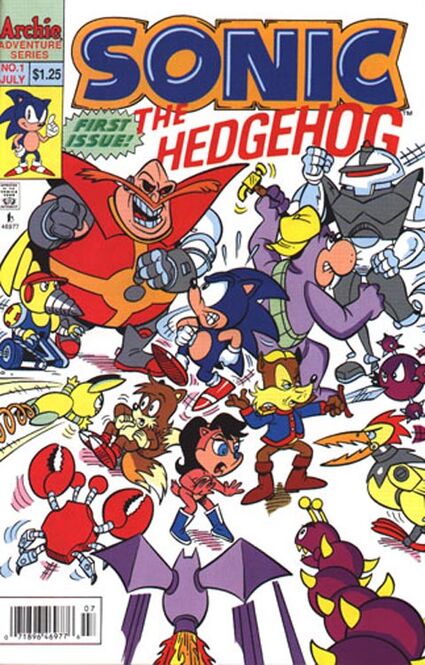 We can be called many things here at Nerds on the Rocks, I’m hoping to add sell-out to the top of that list. For some strange reason, a search for Sonic the Hedgehog (and various versions of the search) has been the most popular way for people to discover this website. While we have had Sonic coverage in the pass including a special episode of NoTR and reviews of his game, it hasn’t really been an overwhelming presence on the site.

Which is why today we reveal, Sonic Saturdays, which I hope will become a recurring feature on the site. I won’t promise EVERY Saturday but when given the chance we will spotlight gaming’s most popular blue hedgehog (not that there is much competition). While many other characters and franchises are perhaps more prolific than Sonic’s, few match his presence in the mainstream. He has been the star of nearly half a dozen TV shows and anime. He has had an on-going comic series for nearly 2 decades, he of course stars in countless video games across various platforms. There’s a lot to discuss when it comes to Sonic the Hedgehog.

Sonic the Hedgehog is a comic intended for children/kids and it makes no bones about it. Going as far as to have Sonic acknowledge (breaking the 4th wall of course) his audience from time to time in the comics. It works well in the context of the comic as the whole thing is played rather light-hearted. There are winks and nods to the audience at all times, and an evil villain, Dr. Ivo Robotnik (no Eggman here kids!), who monologues before finishing off his foe.

The comic as a whole is broken up into neat little chapters, I assume to make it easier for kids to read. So instead of a 22 page comic, you get 2 main stories, that are about 7 pages each and divided into part 1 and 2, and then you get some random one page stories, which are actually pretty fun. It gives kids a nice variety, and doesn’t bore them too much, and as a reader, I got closure to a lot of stories within a few pages.

The stories themselves were fairly basic. Sonic is the good guys. The Freedom Fighters are his friends and also good guys. Dr. Robotnik is evil and he has an army of robot minions, who in a nice touch are mostly comic versions of enemies from Sonic the Hedgehog 2 on the Sega Genesis. Dr. Robotnik hatches some evil master plan, and Sonic foils it all in a few short pages.

There’s little in the room of actual growth or deep, layered plotting, and honestly the book doesn’t need it so it doesn’t pretend to have it. I won’t fault a book for knowing its audience and sticking with it. More books should attempt that.

The art in the book is also fairly simple. Some panels don’t even have backgrounds, instead the characters are against a white backdrop. It works for the most part, but the style is a bit simple to a fault. Some of the characters expressions and actions come off looking odd in certain scenes. But again, first issue, hopefully it improves with time.

Like I said at the start of the review, this comic meshes together ideas presented in various other mediums, and briefly wanted to touch on them. The most obvious one is of course, The Freedom Fighters, including Sally and Antontine was the group that fought alongside Sonic in Sonic Saturday morning, and it seems like the cartoon’s style and theme holds the most influence over the comic series. Robotnik’s henchmen and robots are based off of designs of characters from Sonic the Hedgehog 2 including Grouder and Sol. Finally, the sense of humor and characterization of Sonic seems to be based on how he was presented in The Adventures of Sonic the Hedgehog. I must say, it does a pretty damn good job of combining all of these elements.

I won’t bother with a recommendation/New Reader scale because really, the comic is nearly 20 years old, and still going. You are usually presented with a fairly decent guide during Free Comic Book Day so always a good jumping on point. I don’t know if I could easily recommend to adults or people who aren’t fans of Sonic the character though. So your miles may vary.