With the premiere of NBC’s Constantine last night, the fall line-up of Comic Book TV series have officially launched. We currently have 6 shows airing on a variety of networks (and cable), and wanted to offer up some brief thoughts based on their first few weeks and episodes.

And to save time, this list is also ordered in personal preference of each show, and if think worth watching. Though ultimately, I don’t think you can go wrong with any option currently.

Arrow – Starting it’s third season, it’s sometimes easy to take for granted just how enjoyable this show can and continues to be. What has really surprised me about this early part of the season is how much emphasis is being put on the characters, and not necessarily the heroics of it all. The last episode, featured Oliver as the Arrow for less than 2 minutes in an hour! And enjoyed the heck out of it. 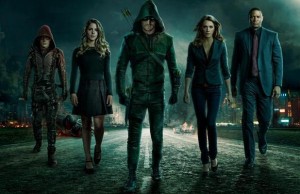 The quiet character moments, and a focus (or at least desire) to fix some of the show’s more nefarious characters such as Laurel Lance and Thea Queen means that the it is also a lot more bearable the entire episode.

If I had to rise one problem that may arise, if everyone on the show is in the hero or villain business, who becomes the “normal” and grounded viewpoint for the audience? Granted, it was a pain to suffer through their stories at times, but Laurel, Moira, Thea, Tommy and the likes bought a counter to all the ass-kicking and wars. To quote The Incredibles, “And when everyone’s super, no one will be.”

The Flash – A lot of comic book shows are guilty of hiding the superheroics on their show just due to budget. Smallville spent most of its 10 years with Clark never dawning the cape, Agents of SHIELD was light on supers in season 1 and Gotham… well I guess Batman doesn’t have powers in general. But The Flash embraces it, and it embraces the comic book nature and good-fun of The Flash character. It has some cheesy elements, but I think it’s balanced by knowing where its heart is, fun characters and some amazing special effects.

The show only has up to go especially since next week will begin to introduce more of The Flash’s familiar rogues gallery starting with Captain Cold. There’s the promise of Felicity Smoak’s guest appearance and of course the hotly anticipated crossover with Arrow later on this year!

The Walking Dead – I don’t usually count this in the crop of comic book TV shows, but it totally counts. Twas far (we’re only two episodes in), it has been a solid season. My biggest gripe with the show has always been just how uneven it can be at times. So let’s hope they keep the baseline high for this season. Also cannibals, gross!

Gotham – This is easily the most divisive show on the list, and if you ask me I wouldn’t recommend it one way or another. At this point, you either embrace the line the show is trying to walk or you don’t, and there’s really no right or wrong about it. It’s an odd tone being both hammy and serious, comic booky and gritty, but I think it has gotten better at finding a neutral ground. I dig a lot of the characters on the show with Fish Mooney, Penguin and Bullock being 3 of my personal favorites. I’m enjoying the slow-brewing gang war as well and can’t wait to see what happens when that explodes.

Again to focus on an area the show can fix, it’s balancing the characters and their role on the show. Sometimes it works, like this past week with Bruce and Alfred investigating the corruption in the family business eventually leading to crossover with the villain of the week plot, but there’s other times like Gordon sharing way too much information about an active crime with a 10-year old boy that just doesn’t work. Also, stuff like Selina’s random appearance to steal a dude’s wallet adds nothing to the show, other than “Hey remember she’s on here too!”

Constantine – Only an episode in, and it was the pilot, which is very piloty in that it speeds through a lot of stuff in an hour trying to establish the characters, the story, the lore and the world… and then having to literally break it all apart at the end because they recast the secondary lead, and twas had to write out the central character of the pilot. Easy come, easy go!

And it seems, we may have to go through this whole song and dance again next week as we introduce the main female co-lead!

Marvel’s Agents of SHIELD – Though it may be last on the list, I will say that season 2 thus far has been a marked improvement over season 1. I think my biggest beef still remains, it feels like nothing of importance happens on this show. I know week to week, things happen to the characters and their struggle, but it feels like an old school Saturday morning cartoon, Joes vs Cobra, Autobots vs Decepticons and now SHIELD vs Hydra, which works for those because cartoons. here it just feels like two sides spinning their wheels as they exchange minor wins and losses every week. I do think the new additions were great. Much more likeable characters than some of the original set. The action is better and the special effects is as well. Bringing in named heroes and villains like Absorbing Man and Mockingbird also helps. I don’t know if I quite recommend it yet, but if you were on the bandwagon worth continuing. 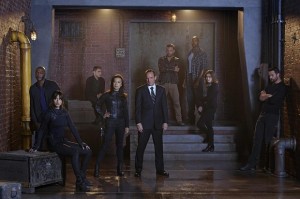 On the note of nothing mattering, this is a show that is part of the larger Marvel Cinematic Universe, and I get that it excites some people. But it kind of does the opposite to me, the most interesting thing to happen in season 1 of AoS was the results of Captain America: The Winter Soldier, do you want to know how much Agents of SHIELD itself factored into the THREE Marvel films that came out during its rookie season? Not a ton. And I really don’t want to invest time into a show with the prospect of maybe, someday it will pay off in a movie. I feel like it would have been better served to be far-removed for any of these films like the upcoming Agent Carter and Daredevil TV series.

That’s that for now! We hope to launch a smaller podcast focused on discussing the weekly comic book TV series, but still in the works!