Serenity: Leaves on the Wind #2 – Review

Back to the ‘verse we go this week, folks, with Dark Horse’s Serenity: Leaves on the Wind #2. If you read my 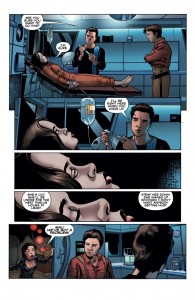 Some of that weirdness... check out Inara's face in the last frame. o_O

previous review of #1, you know that I’m pretty excited about the new series and quite enjoyed the potential for which the first issue laid some solid groundwork. That said, picking up a superbly popular series and spinning a continuation of it is certainly no small task, brother of the creator or not.

The art is powered by the same team that brought us the first issue, and remains much the same, so I will only briefly go over it. The art, as a whole, is good. I’d actually say very good, but it’s not really my style, directly. The inks/pencils have that very streaky/crosshatched shadowing and detail when up close. I don’t particularly mind that, but I don’t quite love it, as I do prefer seeing intricate detail without those blanket shadowing methods. At the same time, long distance images are rather flat and lack a lot of detail at all, like when you are given some odd-looking minimalist interpretation of eyes and a mouth, a nose, as well, if you’re lucky. Again, this is a pretty common and often successful style used in comics… just not my preferred style at all.

That all said, an attempt at an objective review doesn’t really take into account my predilections for art, but rather how well the art style was completed. In this instance, it was actually completed quite well. If you’re a fan of this style, you will be pleasantly surprised by how consistent the issue is. For me, the highlight of the art, again, was in the coloring. While colors may not always get the attention they deserve, they really can make or break an issue’s art. While there are themes of colors prevalent through the various mini-episodes the issue’s story unfolds, the colors are always dynamic and varied. They stand out most in very small, but incredibly well-done moments. They are intricate things, even seemingly inconsequential, but they are done in such a careful manner that they command attention. For 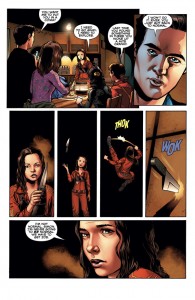 The darkness of page 15

reference, check the floor tiles on page 6, the “Wanted” poster on page 10, or the outstanding use of darkness on page 15. Colors are what make these frames outstanding, rather than very good, regardless of your stylistic preferences.

Art aside, so long as it’s passable, what will really carry or condemn the continuation of something as popular as Firefly/Serenity is the actual story. There were a lot of monumental events that happened between the end of Serenity and the first issue of Leaves on the Wind. It has the potential on a macro level to feel rushed as we all adapt to the changes, including some sweeping ones. The energy that the issue imparts keeps you from really considering too much of that. While there are large leaps (and some seeming coincidences, which typically irk me), the action in the issue keeps your attention on the now, which is really what a story should do.

There are some huge risks taken in the issue, both on a story level as well as for those of the characters involved. Some beloved characters are reintroduced, some left behind, and, really, every one of them in danger. And I don’t mean, “Hey, man, maybe at some point in the future you’ll look back and be like, ‘Aww, I should have maybe done that differently,’” but I mean, “Holy shit balls, I don’t see how we get out of this without some major losses.” I suppose that isn’t terribly surprising, given that this is also the series that killed some very major characters, one not even on-screen.

Regardless, the initial issue gave some very interesting insight into the potential calamity that is to come, and I believe the second issue has really just shown the start of it. Given that the Serenity is already one crew member down and the issue ends on a monumentally large cliffhanger involving lots of blood and explosions and an old enemy, it’s hard not to get swept up in the current. I am certainly liking where we have been taken so far (despite my stylistic disagreement with some portion of the art), so consider me fully on board for the coming issues.