Serenity – Leaves on the Wind #1 – Review

The good news for Firefly fans this week is that it includes the release of Serenity – Leaves on the Wind #1 from Dark Horse. This issue picks up pretty close to immediately after the ending of Serenity, the movie finale to the Firefly series itself. Zack Whedon is at the helm on script, with a note of Joss as Executive Producer, so we are in… familiar(ish) hands, at least.

The art of the inaugural book in this limited series is surprisingly good. Actually, I’m not entirely sure why I think it’s surprising, I’ve quite liked the art from the other Serenity comics, but for some reason I still found myself pleasantly surprised. While there isn’t a lot of action, pew pew, explosions, and the ilk (that I’m certain will come with the maturation of the story arc), the art still feels energetic. The frame shapes and layouts are all very standard, very clean, but the perspective is often unique, adding a particular twist to the art. Sometimes, as 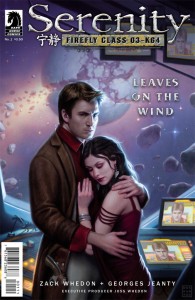 discussions occur, the perspective is an angled forty-five, lending a fly-on-the-wall tone to the panel. Other panels are skewed to give you a broader angle of an unnamed planet’s social scene, including the order in the streets juxtaposed with the rebellious tagging of the symbols of “The New Resistance” in the shadows around the corner.

The inks do a good job of feeling minimal, but still applicable. Shadows are occasionally streaked or cross-hatched, but it’s used sparingly to give a clean look to the comic. Colors were also strikingly completed, complimenting the dynamic feel of the pencils well, with a rather extensive palette. At the same time, the palette is used appropriately. A rather brooding session of Alliance operatives discussing imperatives combines the fly-on-the-wall perspective with a solemn black and blue treatment. On the other hand, a bustling social market varies from bright yellow to a light violet, and just about everything between.

It’s always a bit unclear just how much of a hand Joss has in, well, really anything his family has their name on, and this is no different. That said, I suppose an examination of who did the lion’s share of work or whom we may consider “responsible” for the execution is really neither here nor there. Instead, I’d like to talk about the actual story that’s involved in this issue as it’s rather good, in many respects. That said, there are about three or four “oh shit” moments that pass by rather quickly in the comic, which says something considering the comic is the standard twenty-four pages. Devout fans may feel that these important moments were glossed over, but I still 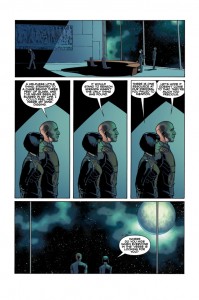 All the solemness of teal and black.

believe there is reason to have faith.

When I say this comic picks up shortly after the end of Serenity, I mean likely weeks afterwards. Some amount of fallout from the broadcast of what happened at Miranda is already solidly in place. That also means that some relationships have had a moment to evolve, as relationships often do when put under such interesting pressure. And by interesting, I mean, “oh, god, oh, god, we are all going to die.” Given that so much has already happened, as touched on earlier, it does initially feel a little bit rushed. However, given that this is the introductory issue, a lot of these new dynamics in the relationships may well be fleshed-out later on in retrospect, so it’s hard to count that as a fault so early in the arc.

Overall, there is certainly a lot of meat left in the ‘verse for Serenity and her crew, and I’m glad to see a new series come out for it. The art is noteworthy and the story sets up a lot of potentially wonderful things to come. If you’re a fan in any respect of either the movie or the series, I’d definitely suggest picking this one up. It promises to be an eventful ride, and this is a solid start to the arc.