Rumors have been swirling for the last several days after a picture surfaced online of Scoot McNairy in green socks. We’ve heard everything from The Flash to Metallo, but we have it on good authority that all of those sources are wrong.

McNairy will be playing Argh!Yle!. A villain that may sound obscure to your non-typical DC Comics fan, but is near and dear to many’s heart. But why you may be asking? We hear that the Warner Bros executives have taken to heart the complaints that their last few films have been too dark, gritty, grounded and cold. They have asked Zack Snyder to find a way to infuse a bit of that “Marvel-fun” into the film, and since they needed a greater threat to go against Batman, Superman and Wonder Woman, he chose Argh!Yle!. 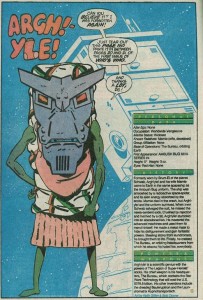 The only question we have is… will Ambush Bug be far behind? Stay tuned to this site for more updates on this most exciting revelation!