She was known to some as Gosalyn Waddlemeyer-Mallard on Darkwing Duck. While I definitely remember watching the show I couldn’t tell you about a single episode, arc, or villain.

She was known to most as Charles Crandall Finster on “Rugrats”. Debuting with the rest of the babies in 1991, Chuckie occupied the role of Tommy Pickle’s reluctant sidekick, the voice of reason, and, of course, the fraidy cat. There was something about this group of infants that struck a chord. Parents couldn’t wrap their heads around “Ren & Stimpy”, but they could relate to Stu, Didi, and even the Rugrats themselves. So charmed by the show, my family paired my generation with our Nicktoons counterparts. My bold younger brother was Tommy. My ever-quarrelsome cousins were obviously Phil and Lil. And me – well, I was Chuckie. 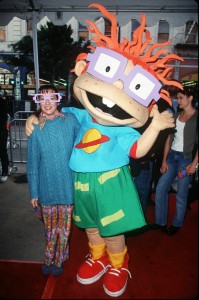 I know Christine Cavanaugh from many of her roles, but the one I always return to is her small guest spot as Mona Tibbs on “Salute Your Shorts”. Seeing her beauty, her romance with Camp Anawanna counselor Ug, and my discovery of her voice acting credits, I have to admit I fell for her. My elementary-school heart carried a small spot for a woman I would never meet.

Much more than a pre-pubescent crush, I discovered that voice actors were real people. In the pre-Internet days it was difficult to put a face on those who brought your favorite characters to life, and here I had my Rugrat’s spirit animal. Learning to search the credits, I cheered her success on “The Critic” and “Aaahh!!! Real Monsters”. It wasn’t long before her talent was widely affirmed and she played the leads in “Babe” and “Dexter’s Laboratory”.

She abruptly retired from voice acting in 2001, opting to spend more time with her family. With just over a decade in the business, she left behind iconic characters and a celebrated body of work. From overly-cautious gingers to sons of overly critical critics, from sheep-herding pigs to Eastern European-accented boy geniuses, Christine imbued her roles with a vibrant spirit. Her dedicated performances made her characters hilarious and touching within the same breath.

I always hoped to meet her at a convention, some reunion of the original “Rugrats” cast to celebrate the decades-long presence of the franchise. I always hoped to get her autograph and thank her for pulling the curtain back on the then-hidden world of voice acting. I always hoped she could see her fans, all the people whose lives she touched with her work. With the outpouring of sorrow following her passing I think, somewhere, she knows.