So let’s get this out of the way first: no, the new Robocop isn’t as good as the original. But that doesn’t mean it is necessarily bad. If they had to remake Paul Verhoeven’s 1987 masterpiece, they could have done a lot worse than this. And after all, the original is not a sacred cow. 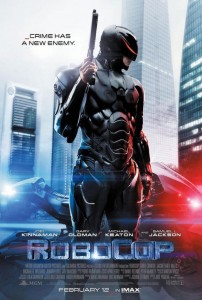 Paul Verhoeven’s Robocop was so great because it provided all the violence an action junkie could want while also sneaking in satirical commentary on 1980s America. In between the gory shootouts and executions, the movie also mercilessly mocked pop culture with footage of a really annoying sitcom and fake commercials for a humongous car with terrible gas mileage. We saw urban decay, the indifference of politicians, and the logical consequences of what would happen if we privatized the police force. This was what really made it more than a standard-issue action movie, and the two sequels suffered by taking the whole premise much too seriously.

The new Robocop is much gentler in its criticism, and I think it’s worse off for it. But it still has some subversive things to say. The beginning of the movie depicts a news report from American-occupied Iran as a TV journalist happily narrates about the peaceful Iranians who stand around in the background with their hands up while giant robots inspect them. The targets forÂ thisÂ movie are American imperialism abroad, the compliant media, and drone warfare. What it has to say is not particularly new, but you could have said the same thing about the original 1987 movie. I do have to say that in the 2014 Robocop a lot of the most subversive stuff is perhaps presented a little too subtly. My favorite was a headline in one of the news broadcasts which revealed that in this fictional future, Americans are desperately trying to cross the border into Mexico.

The biggest problem with this newer Robocop is that it is PG-13 which means the action just isn’t going to be as hard-hitting as the original. Most of the fighting is robot against robot (or cyborg against robot). Whenever humans are involved, the camera cuts away before we see any bullet impacts. Director Jose Padilha is doing his best, but there’s just no way to make this stuff as compelling and tense as he would be able to with an R rating.

If the satire is toned down and the action is not as good, the one thing the new version of Robocop has over the original is a heart. 1987â€²s Robocop was too satirical and cynical to generate much emotional pull. We rooted for the protagonist mostly because he wasn’t as despicable as everyone else. 2014â€²s Robocop makes us root for the main character by focusing squarely on his dilemma and by making two interesting changes: unlike the original, Alex Murphy is always aware of who he is, and his family is still present and plays a critical role in the plot.

This greater focus on character means that the performances of the actors actually matters, and they fulfill their roles admirably. Joel Kinnaman manages to leave some imprint on his character instead of being another bland actor overshadowed by the special effects (like that guy from Pacific Rim or whatsisface from Battleship). His standout scene is when Alex Murphy asks to see himself. Using only his face, Kinnaman successfully conveys Murphy’s growing horror as his robot body is disassembled before a mirror and he sees how little is left of his original body. Abbie Cornish is believably anguished as Murphy’s wife who must remind him of who he is. The better known actors play supporting roles, and they include Michael Keaton, Gary Oldman, Samuel L. Jackson, Michael K. Williams, and Jackie Earl Hailey.

Don’t get me wrong. This movie is not high drama. But considering how underwritten the emotional beats are in the screenplay, the actors manage to fill in enough to make us care without becoming mawkish, and the director allows just enough time for things to breathe before moving on to the next action scene.

There is no question in my mind that Robocop 2014 will be forgotten in a few years whereas Robocop 1987 will remain relevant for many years to come. But for what it is, the Robocop remake is an enjoyable two hours with just enough social commentary and character drama to be more than a brainless action movie. And it makes enough changes and updates that it doesn’t end up looking totally unnecessary. Yes, it’s the product of Hollywood recycling, but it’s not like the original movie was produced with the purest of motives either. I honestly enjoyed this much more than many of the movies leading up to The Avengers.