Road to Justice League: The Brave and the Bold #28 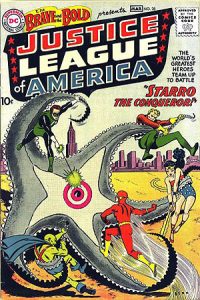 In order to begin any journey, one must start at the very beginning. And for the Justice League that would be the spring of 1960. The year the world was introduced to the team for the very first time in The Brave and the Bold #28.

The most fascinating thing about the Justice League of America’s first adventure is that it isn’t an origin tale. In this day and age, I’m just use to everything being explained and built up. The story however begins with the team having an official name and means to communicate with each other. In a way, it’s rather refreshing to just let a story unfold. And it all fit into a single issue to boot.

The story features what would become known as the Big 7 of the Justice League… though it is a bit misleading. While Superman and Batman makes appearances in the comic, they amount to little more than a cameo in the first issue. Once again showing the time, it’s weird to see Aquaman kick-off the comic and Batman and Superman sidelined for the first major team-up of DC’s biggest properties.

Legion of Doom: Starro the Conqueror

Everyone who knows of the Justice League probably know their first adventure was against Starro. What I was surprised by though is while Starro has the shape that it’s always portrayed as, it’s powers were different. Instead of using star spores to control people’s mind, it had a telepathic ability and that proved weak to lime… don’t ask. 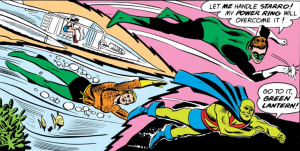 Well covered most of it, Starro comes to Earth to conquer mankind the Justice League looks to thwart the threat. Starro’s plan is to infect Earth-based starfish and have them collect the data he needs to take over Earth, but each of the offsprings are thwarted by members of the Justice League before uniting to take on the original Starro. It’s a fairly simple story and told straight-forward. Little in the way of twists and turns, but it works.

The first adventure of the Justice League isn’t quite a smash bit, but I’ll give it credit for being a straight-forward, no-nonsense story of good versus evil.