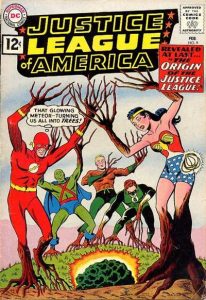 Much like the original story, the core 7 of the Justice League make an appearance in its origins. Due to the narrative structure (it is told via flashbacks), Green Arrow and Snapper Carr are present, but do not take part in any of the action. Unless you including cleaning up the League Headquarters.

I would also include the disclaimer that Batman and Superman also don’t play a major role in this issue either. Though unlike the previous one, they are at least in the comic and part of the action. 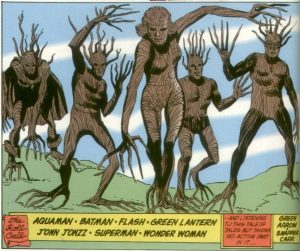 There isn’t a ton of information given on the villains of the story, but they do make for an interesting set-up. After the death of their current ruler, the Appellaxian strongest are then tasked with a battle to the death to determine the next ruler. To not destroy their homeworld, they are set to a nearby planet that has similar condition to their own and wage war there.

7 warriors are sent to Earth and each possessed a different ability, and would use it to transform the people of Earth to their warrior to help them in their war.

The Justice League of America are celebrating the 3rd anniversary of the formation of the team. As he had never heard the story before, Snapper asks the League to retell the origin of how the team came to be. Each superhero goes around and tells their part of the tale. Starting with the Martian Manhunter, the first 5 members of the League did battle with an individual member of the Applexa before being turned to wood by the 6th.

With some coordination and teamwork, the 5 members on the scene (Martian Manhunter, Green Lantern, Aquaman, Wonder Woman and The Flash) are able to break free and hunt the 7th and final warrior. When they make it there, they see that Batman and Superman are already engaged in battle and quickly defeats the Diamond creature.

In a fun little nod to their history, it is pointed out that Superman and Batman team up so often that they had each other’s back without needing the extra coordination.

The League then shares that it collected the shavings from the Wooden Appellaxian as a souvenir of their first mission. Superhero trophies are kind of messed up when you think about it.

Overall, I thought this was a great read. It all fit into a single comic. It gave most members of the Justice League an unique foe to fend off. It moved briskly and had some cool visuals.

The sometimes clunky reading of older comics is much better when its framed as a narrative device within the book (the League telling Carr and Arrow about their adventure).

I was most surprised that this version of the origin has never made it outside of the comics. It seems like it would have been a decent fit in the era of the Superfriends.