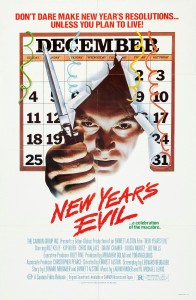 1980’s New Year’s Evil is without a doubt the most bizarre holiday-themed slasher flick I have seen yet. It’s a grimy little piece of “punksploitation” that is clearly from an era before filmmakers cracked the apparently elusive horror formula established by 1978’s Halloween. The film is produced by the prolific (at least for the 80’s) duo of Menahem Golan and Yoram Globus, but has little of the charm of their later efforts.

After an interminably long credits sequence that shows a group of obnoxious punks driving wildly down the road harassing people, we’re quickly given all the exposition we’ll need to “enjoy” the next hour and twenty minutes of mayhem. New Wave/Punk radio icon Diane “DJ Blaze” Sullivan is hosting a New Year’s Eve countdown celebration when she receives a sinister phone call from a man disguising his voice with the most non-threatening-sounding voice modulator. The man informs Diane that he will kill someone when it becomes midnight in each time zone across the country until they reach their own, and that she will be the last to die. 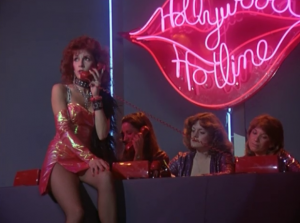 The movie starts out promisingly enough, with all the cheesy/bad acting you would expect from a low budget slasher, but most of its goodwill is lost when focus is shifted to the killer (who refers to himself as “EVIL”), who gets way too much time front and center. Despite the movie building toward a ridiculous twist, we see practically everything the killer is doing the entire time. His plotting, his mistakes… hell, we even watch him awkwardly seducing several women along the way – once while wearing an amazingly fake moustache!

Our killer’s modus operandi is to earn the trust of his victims (with drugs or by doing his best imitation of a 70’s porn star, or even by name-dropping Eric freakin’ Estrada!) and then murder them as the clock strikes midnight… somewhere. The killer records the victims’ last moments onto an audio cassette tape, which he then plays back to DJ Blaze over the phone before awkwardly threatening her some more. When we’re not seeing the killer do his thing, we’re treated to some fantastic unintentional humor in scenes of DJ Blaze’s adult son wearing his mother’s stockings on his head or violently plucking rose petals. 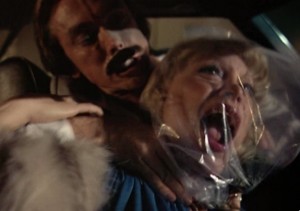 I guess that it’s supposed to be a twist when it’s revealed that the killer is someone very close to DJ Blaze, but we’re not given enough context for it to really mean anything. The killer’s own justification (“Ladies are not very nice people”) is hysterically funny in its absurdity, and I did get a kick out of the role that DJ Blaze’s son plays in the killer’s motives. Aside from that, the ending falls flat with the film trudging through a bog of poorly edited chase sequences and terrible-looking rubber Stan Laurel masks.

New Year’s Evil is a difficult film to recommend – even to hardcore horror fans – but there are enough bizarre and funny moments to make it worthwhile, provided you have a few drinks and friends to enjoy it with. It might not be worth watching all the way through, but where else are you going to see someone get suffocated with a bag of weed?

Rating: 3 (out of 7) – New Year’s Evil is not one of the better holiday-themed horror films out there, but it is certainly one of the most unique.

And check out our drinking game for New Year’s Evil.