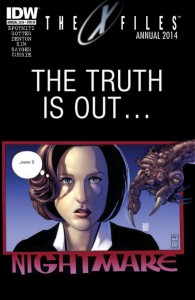 Featuring one of the original series writers, Frank Spotniz was also a bonus for me and in this edition we are taken back in time to the early days of Fox Mulder and Dana Scully when they were first called in to conduct investigations into a case for the FBI. The action takes place in New York and Mulder and Scully fast realise that everything is not as it seems.

From the outset the storyline is closely based on the series, which for any X-Files fanboy is like hitting the jackpot at Riverbelle casino online as there’s nothing worse than revisiting a favourite and it’s almost unrecognisable.

Wayne Gold is the stories main focal point and the writers have created a ghostly tale of a man watching over his wife- a sort of till death do us part- or longer-concept. This ghostly apparition has delivered a message to his wife saying she’s at risk and it’s up to Mulder and Scully to investigate, crossing paths with a rather creepy priest along the way.

The first story has a deeper message and we always found that the X-Files offered that little bit extra. Once again the comic stays true to the original in this way, making it more than just a story and providing a thinking point.

In the second story, Dave Sim, the creator of Cerebus writes for the first time as an X-Files contributor and his tale is rather more nightmarish than the first. Sim has created “Talk to the Hand” which focuses on a sleeping Dana Scully and the events that occur in her subconscious, adding a darker edge to the #1 edition.

This comic has been well done in every aspect and the story lines, back story, parapsychology elements and colour usage continue over all 50 pages. The teaming up of Spotniz and Sim’s different yet complimentary styles is exceptional, and the visuals and storyline are absolutely epic. X-Files fans need to get their hands on this comic now to enjoy a supernatural experience for themselves.