Indie games in 2015 are interesting. The ease of access of modern development tools means that anyone can make a game if they want to, and the tools are relatively easy to use. As a result of this, many have taken to reviving games of old that they enjoyed and wish to see more of.

Worlds of Magic is

a turn based strategy game in the  4X format. The 4X genre has gotten pretty crowded in recent times what with Civilisation’s unending popularity, the return of Age of Wonders and other games such as Paradox’s Warlock series. World of Magic hopes to differentiate itself from the pack by being a spiritual successor to the 1994 Microprose release Master of Magic.

The first thing the game presents to the player is options, lots of gameplay options. Unfortunately what the game doesn’t do is explain those options to the player. The modes of play are standard for any 4X game, single player matches, hot seat (albeit one local to your machine), and arena (which is a custom unit battle), exceptions being Worlds of Magic lacks any and all kinds of networked multiplayer.

Upon mode selection, the game asks you to select the planes of existence for your game. Each of the seven planes has advantages and disadvantages and some are suited or even disallow some races. The issue here is that I couldn’t figure out what the game means by a “plane of existence”, and this is where the game’s biggest issues appear.

Worlds of Magic is a spiritual successor to Master of Magic, and the phrase “spiritual successor” is used in the sense that it is very similar to Master of Magic and has few changes. This poses many problems, especially for newcomers as, if you have no knowledge of its predecessor, you are not going to fare very well in this latest incarnation. It does very little to explain itself, and its mechanics. The in-game hint system is ever present, but it doesn’t really do much other than explain bare basics such as “left clicking moves a unit”, “right clicking a city takes you to the city screen”, and “only one spell can be worked on at a time”. There is a wiki, that can be accessed using the link in the launcher, but the wiki is not very helpful either due to lack of content, and numerous comparisons to MoM. Compared with its contemporaries, World of Magic simply does not do enough to ease players in, and suffers greatly for it. Since release, Wastelands Interactive has released a 54 page manual which clearly explains aspects of the games interfaces and systems, but I can’t help but wonder why this wasn’t available on launch, and why this information isn’t explained in the game itself.

When it comes to gameplay there is a lot to like for experienced 4X players, or should I say, a lot that sounds good on paper. There are a lot of options to choose from when starting a game, you get to choose any of seven planes of exis 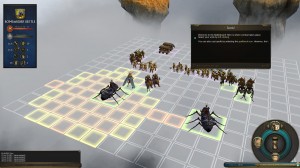 tence (or maps) to make up the world, one of eight different fantastical factions each with a array of unique units, one of thirteen sorcerer lords each with their own different traits, and a selection of spells to start with. Once selections are made the game operates like most 4X games, build cities, manage production, manage resources inside cities to prevent unit desertions, and win in the standard 4X fashions. The world that are generated have lots of different features for players to reap resources from, but most are guarded by enemies that need to be defeated before those resources can be claimed. These battles, play out on a separate scenario where each player takes fine control of units in their armies, and winner takes all. For those not interested in taking part, there is an auto-battle feature which is nice. Aside from that, one of the few major changes is the Forging system, which allows players to craft weapons for heroes. I cannot attest to the changes this system makes to gameplay because the UI was so confusing, broken, or both, that any time I tried to use it, nothing happened. AI seems to be hit and miss, with it sometimes making logical decisions, and sometimes it seems to just steamroll everything its path with no effort, against all the odds. Diplomacy features are basic but they work, spells are an interesting idea, but seem so situational, they I rarely found use for them during gameplay.

These problems are glaring issue throughout the experience with Worlds of Magic. One battle I had, all game logic stopped. AI wouldn’t complete its turn, menus didn’t respond, and nothing would work. Seemingly random game breaking issues happen all the time and it makes for a very frustrating experience. In addition, most of the user interfaces encountered during gameplay are  very unintuitive, and left me wondering what things were for, if I was making a wise decision or I was doing anything to affect the game at all.

On a presentation standpoint, Worlds of Magic looks like a game that would be released in the early 2000s, it is on par with strategy staples such as Age of Mythology, a game from 2002. The sound effects fare better when they exist, which is not everywhere that you would expect them, and the music while there was clearly some effort put into its orchestral score, is so generic, grating, and obnoxious that, in order to play for more than ten minutes, I had to mute it.

Review 3 (out of 7): Worlds of Magic tries a little too hard to emulate games that are 20 years old that it forgets to include a newer generation of 4X players. With dated presentation, unintuitive interfaces, and very serious bugs aplenty, it only seeks to frustrate the few that arent already alienated by its pedegree.