Titan Souls started it’s life during a game jam. The concept was interesting: you are a boy who has nothing but a bow with a single arrow. All you could do was roll, run, shoot the arrow and make it return. You wandered through the pixel art wilderness in a top down view and killed a couple of bosses. It wasn’t easy though because a single hit would kill you, but the same rule applied to the bosses and their weak point. 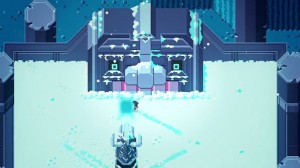 The final game still follows the same basic principle, you still have the same amount of limited abilities and you don’t earn experience or new ones. It’s all still about wandering through the nice looking environments to find the next Titan to kill. They greatly expanded the overworld which while empty has a beautiful melancholy feeling to it. To help create this mood, the game makes great use of its music. For the most part, the music blends together with the environmental sounds to great a mood. And picks up the beat when you encounter a boss to really drive home the importance of the task ahead of you.All of this is very reminiscent of Shadow of the Colossus. It even has the same minimal approach to it’s storytelling, but I don’t think it works out so well in this game. 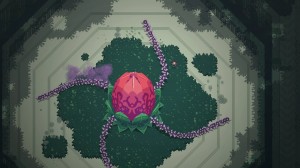 Where this comparison breaks down though are the boss fights. They are quick and simple. The encounters can be over in as little 10 seconds if you recognize the boss’ weak point and to be honest that wasn’t hard to figure out most of the time. There were like 3 or 4 bosses that were a little bit more involved than just evading the enemies attacks, and then hitting the weak spot with my arrow. So while they also added a lot of bosses compared to their Game Jam version, I didn’t feel like these boss battles were much more complex. At least, not like the ones of Shadow of the Colossus. There are some good ideas in these bosses, but they don’t really nail the execution.

I finished the game in un 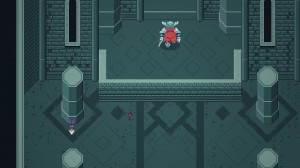 der 3 hours and really felt like it needed more content or more interesting boss design. It definitely needed something. Even in this short time the neat concept of their prototype wore kind of thin. You can play the game again on a harder difficulty and even modify it with options like just having one live, or not being able to roll. Speedrunners will probably really enjoy this game, but I couldn’t help but feel the game was lacking especially for 15 bucks. The other big flaw is how Titan Souls handles death. There are checkpoints scattered before boss encounters, and once you face defeat your respawn there. The problem however, is that none of the respawn points are outside of the boss arena so you need to make the trek back every time you die. While 10-20 seconds doesn’t seem that long, it does continue to add up when you have to retry a boss battle multiple times. It became a bit of a nuisance by the end. Why they couldn’t have you restart right at the Titan is beyond me, because these fights are all there is to this game.

Review 4 (out of 7): Neat concept, that just felt stretched thin. Most people will probably also feel like they are not getting enough bang for their buck.

The Review is based on the PC version of the game. It is also out on Mac, PS4, Vita and will come to Linux down the line.