Let’s put all the cards on the table. Video games have notoriously been a terrible source for movies to mine thus far. That hasn’t prevented me from finding some element of entertainment in a handful of them including the original live-action Tekken movie. I enjoyed it so much that I had the slightest interest in the sequel being at least half as entertaining. 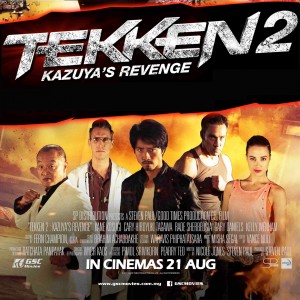 See there’s a certain charm and insanity to making video game movies. I know people will disagree with me, but when the creative forces decide to embrace the inherent silliness of the medium, we end up with terrible but enjoyable films. On the other hand, when you seem to take a silly source material seriously, you end up with a movie with no unique vision and a pain to sit through. Though this isn’t an exact science as the Mortal Kombat sequel actually suffered from embracing the source material more!

What happens between Tekken and Tekken 2 is that the creative team decides to focus more on a central character than the concept behind the tournament and its champion. Instead of the bleak, but colorful landscape of the original, we are instead whisked back to the beginning. And we’re giving a very dry, and dusty setting.

Here we meet our hero, who is simply branded (quite literally), “K” throughout most of the film. You see “K” has lost his memory and falls in-line with the wrong crowd. The really wrong crowd, who tests then trains him to become an assassin. Along the way, he falls in love with a woman and you pretty much have the first 80% of the movie. Sprinkle in some random flashbacks to earlier in the film including two sequences that flashback to pretty much the same thing 5 minutes apart, and you get the majority of the movie.

And no, not glossing over any subplots or additional characters. This movie is sparse on either of those, for better or worse. In time for the climax, the movie finally injects a bit of the Tekken spirit as it introduces Heihachi as the big bad of the film. Kind of, he gives a speech before a weak final fight and the movie ends. The ending which apparently threatens us with a potential sequel. Please, don’t!

The acting is worse than you would expect from such a film. Again, the problem with attempting to take the source material seriously is when the acting falls flat, it really stings. None of the performances really stand out. And truth be told, I couldn’t tell you any of the characters’ names if not for some of them being from the video games.

Speaking of it’s video game origins, this movie also has absolute dog shit for fight sequences. Nothing of note. They aren’t well-choreographed, which is just a huge knock in the post-The Raid world, but they also lack any type of impact or importance to the film. And of course the biggest sin, it doesn’t infuse the fights with any of the spirit and vigor from the video games.

Review 1 (Out of 7) – There’s nothing here worth recommending at all. There’s not even a tongue-in-cheek tone to help get you through this, and as I learned… not enough booze either. Avoid at all costs.