It’s hard to deny the charm of a good combat-racing game. We’ve come to know classics over the years including Mario Kart, Diddy Kong Racing, and Sonic & All-Stars Racing. Each of those franchises, however, had a large 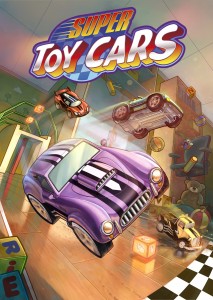 budget and was released as a full retail title. Is there room, then, for a racing game with smaller goals? Is there consumer interest for a game made by a smaller team as a change of pace from the widespread familiarity of Mario Kart 8? Indie developer Eclipse Games sought to answer these questions with their new eShop title, Super Toy Cars.

The concept of the game is one, most of us envisioned when we played with Hot Wheels and Micro Machines as we were growing up. Common (and uncommon) items in the house become obstacles, tabletops become roads, and vans drive as fast as sports cars. Eclipse does a good enough job with this presentation, as the car models are clean, and the environments, while dull at times, do make you feel like you’re in a giant’s world as you’re dodging 8-balls and driving around toy blocks. The tracks won’t necessarily wow you, but they are fun to play through, and finding shortcuts in each level is rewarding, even if they’re not well hidden.

In both single-player and local multiplayer (online play is not supported on Wii U as of this review), you’ll have the opportunity to play through these different modes: 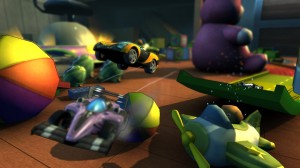 Each mode has its own charm, with Elimination being my favorite out of the bunch (particularly in multiplayer). That said, Time Trial and Time Attack lend themselves to more criticism, as the driving mechanics hold more importance in those modes. Evade, with its fast speed and sudden, subtle landmines, can either be frustrating or chaotic fun, depending on what you’re trying to get out of the game.

With regard of how the game is actually played, there’s a bit of a learning curve in order to get used to the mechanics. There are certainly cars that are more user-friendly in terms of control, but even the best of the bunch will have you crashing into walls on occasion. If you do crash or get caught in a bad situation (it will happen), you’re able to press a respawn button, which will put you back on the track a la ExciteTruck or SSX 3. You will also be able to make use of a boost meter by pressing a button that gives you a five-second burst of speed. Drifting around corners or catching air off a jump will replenish your meter. Unfortunately, drifting is a difficult and wonky process to master in this game, and, depending on your car, you may be tempted to ignore that mechanic even at the expense of filling up that boost meter. 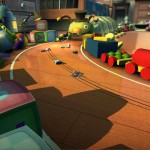 As the game is a combat-racer, you’ll have an assortment of items you can pick up on the track, including homing missiles, mines, an instant-boost-refill, and more. Each item you pick up is specifically labeled (think Diddy Kong Racing), so you can strategize to determine what item will work best for you at any given time. There’s no Blue Shell equivalent in the assortment of weapons, so you’re on your own if you fall too far behind. The items feel balanced, and I was never frustrated nor felt that I was cheated when I was brought down by one.

Super Toy Cars can be played with the GamePad, Wii U Pro Controller, or Wii Remote. The GamePad and Pro Controller work very well, but the Wii Remote has introduced a first in terms of style of control for a racing game. Instead of implementing motion control or even using it like an NES controller, you’re asked to hold the remote upright. It is, of course, one of three control methods, but it’s not one I would recommend. It should also be noted that the GamePad’s off-screen play is not entirely usable. You’ll be able to see what you would normally see on the television, but the HUD (including your current place) is missing, and there is no audio output from the GamePad’s speakers. As this is the first release build, it is certainly possible that those issues will be fixed in a forthcoming patch.

As a single-player affair, Super Toy Cars packs a fair amount of content in the game for its $7.99 price tag. The game follows an ExciteTruck formula for stage and cup progression, as particular races and events can be played one at a time (as opposed to Mario Kart’s Grand Prix). Each of the eight cups has six events, and after completing an event, you are awarded credits that you can use to unlock more cups in addition to upgrading your vehicle or purchasing new cars. Vehicle upgrades will boost your cars speed, acceleration, and handling, which will make your progression through career mode a little easier. You’ll also find that different cars control drastically differently, with some cars handling and turning much easier at the sacrifice of speed, with others focusing on top speed at the expense of easy driftless turning. Stats are displayed as you’re searching for your ideal car, but finding what works best for you really is a matter of trial-and-error with how different each car handles. 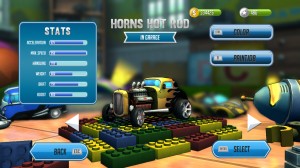 While the single-player campaign focuses on upgrading and purchasing your vehicles, the multiplayer mode has every car unlocked from the start. For a game like this, it’s a very welcome feature, as you would have to sink considerable amount of time into single-player to earn enough credits to unlock all of the vehicles. Unfortunately, you’re not able to see the stats of each car when you are trying to choose, which can give you a few surprises in terms of control if you’re switching cars in between races.

The multiplayer gameplay itself is a mixed bag. As with any kart-racer, it’s certainly more fun to have friends with you, but the game does become more difficult to play when you add more players. The speed of the game is fast-paced, but when the screen is split, the frame rate does take a hit, which can make it difficult to process what’s going on when you’re flying through a track.

The game does include a functional track editor, but without a tutorial, you’re at the whim of trial-and-error to figure out what features exist and what different options do. It is nice to be to customize your tracks using the GamePad and stylus, and test driving on your track can be done very quickly when you want to see how things are coming together. Ultimately, without direction, the track editing system proved to be cumbersome, and it’s also a disappointment that your creations cannot be shared with others online.

Review: 4 (out of 7) Super Toy Cars is a title to approach with tempered expectations. The single-player campaign, while entertaining, doesn’t have much to bring you back after you’ve completed it. Wonky physics and missing online features may leave a bad taste in your mouth, but if you’re simply looking for a cheap, functional racer that will even the playing ground with you and some friends, this $8 package may be for you.