Life under the seas must be magical. Based on The Little Mermaid and Spongebob Squarepants a lot more goes on down there than we are led to believe. Squids Odyssey is here to expand on that idea with an old west-flavored RPG under the sea. 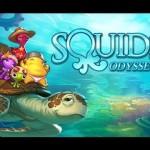 Squids Odyssey is unlike any game I’ve ever played before. Well that’s not entirely true, it’s like a bunch of games I’ve played before mixed and matched into this stellar combination. It’s part Angry Birds/pool with you pulling and angling your characters for the best shot. It’s part RPG with your leveling up and items. It’s part sumo wrestling/bumper buddies with how combat has you knocking into your enemies and vice versa. And ultimately, it all comes together to form a relatively neat package.

The game play itself is pretty simple and straightforward. You control a squad of squids in various chapters to complete the course objective. These include things like clearing out all enemy combatants, surviving a set number of rounds, making it to the exit of a course or just knocking your friends off your flying turtle. It offers up a decent amount of variety and allows you a change of pace every once in a while.

The core combat sees you catapulting your squid assassins by pulling on their tentacles. You are able to line up their direction and the speed/power of their movement. This is monitored by their energy system, which when depleted marks the end of your turn. I found this part of the game to be more enjoyable on the Wii U’s GamePad then using the TV/GamePad combo. The major difference is on the GamePad-only you have direct control over your squid and the playing field while on the TV/GamePad combo, you mess with your Squid on the controller while lining up shots on the television. I found the former to just be more simple. 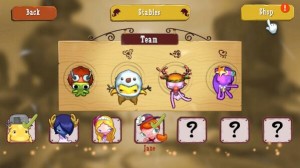 In addition to your basic combat ability, each class of squid has a special ability that helps spice up battles. The Scout, the most basic of units, is able to gain additional momentum during a turn. The Shooter is able to shoot ink blots at enemies. The trooper is able to create a seismic quake that knocks around various enemies (and friends) within the sphere. Finally, there’s the healer who is able to heal a partner’s HP by either bumping into them or having them bump into the healer. While these are all cool and add a nice element of strategy, it never truly evolves beyond this basic abilities. You can power them up, but the ability doesn’t evolve. The strategy doesn’t change.

Never evolving is my biggest problem with the game. When I started it, it was fun and fresh and exciting. And as I continued to play it, it remained fun, but never fresh nor exciting. You realize that you see much of all the game offers in the first 10 minutes. It gives you different enemies, some bosses, but it never really changes beyond the basics. Your breaking point may vary, but I doubt many will make it to the end with the same energy they started.

To try and counter this a bit, the game does offer some environmental and bonus abilities. You can pick up random power-ups on the map which can come in handy in defense and sometimes even offensive situations. The fact that you aren’t in complete control of this (unless missing something) though makes it harder to plan, though adds a next element of chance. 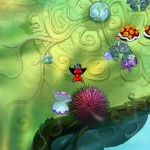 What will hopefully allow you to reach the end is the game’s story. It’s an interesting little tale. I found myself more engaged with the bonding of the characters than the actual plot about the black ink turning everyone evil. And it’s really just a means to set-up the next chapter. So much so that the game really does recycle a lot of environments. Sometimes creatively by having you play a stage backwards or having it be damaged from a previous encounter, but there’s no denying it’s recycling the same assets. I didn’t find it too troublesome for the most part, but it is noticeable.

The re-use of stages also hampers the overall graphical presentation of the game. The game has a nice simple style, but reusing enemies and stages, it’s hard to forgive its simple nature. And again, this is partially due to it’s mobile game origins. Once more, I would also say prefer playing it on the Wii U GamePad.

Review 4(out of 7): Squids Odyssey is a really fun game that may last longer than its concept. If it were cheaper (like $10) would be an easier recommendation. For now, it depends on if you want to give this cool concept a spin.