Spintires arrives in the midst of a sea change in the kinds of content you see on PC. As kickstarter is now a way in which many projects see funding, and many independent developers are seeing their games on Steam, more unique things have been appearing, and Spintires is only the latest example of this. 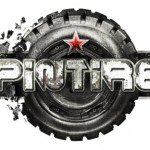 Spintires is not your average game, and nor is it your average simulator. Most serious entries to the genre focus on giving the player strict objectives and are all about getting them done as accurately as possible with tight contraints, be it driving a train, rescuing stranded ships, or even cleaning streets. Spintires on the other hand has very few objectives, and no real limits in which to complete them. Instead it gives you a fantastic looking environment, 4 or 5 different kinds of Soviet truck, a map, and a whole lot of mud to get stuck in; and boy do you get stuck. 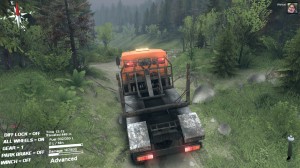 What makes Spintires unique is a one of a kind terrain deformation system which accurately models the behaviour of yep, you guessed it, mud. This terrain deformation is actually the only real obstacle that you will face as you uncover the map, discover new garages, deliver lumber and find new trucks, and for the most part it works quite well. The mud behaves and looks as you expect it to, so if you get one or more tires in a particularly deep and/or soft area, spinning your tires are only going to make it a whole lot worse for you. Fortunately, there is a tool to get you out of most situations.

This tool come in the forms of a winch, which is on all vehicles, but not always in the same locations, and can be used either to pull your vehicle towards a tree or pull other vehicles that you can’t get out on its own. In casual mode, there is also a “rescue to garage” function which instantly teleports your truck back to the selected garage, which in turn repairs the vehicle and refuels it, while at the same time removing the trucks load if there is one.

The main issues with Spintires are apparent when you’re just starting out. Unlocks bizarrely dont persist across saves, some small bushes are indestructible and the game’s UI is extremely unintuitive. The game’s tutoria 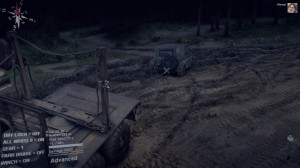 l consists of a screen that tells you what a few keys do, what buttons on the UI do and nothing else. Everything else is left for the player to figure out, and it’s not immediately apparent what everything does for absolute newcomers. In addition, the camera system is very hard to control, with it often not showing you what you want to see, despite you moving it in such a way that you think it should.

Review 5 (Out of 7): Overall, Spintires sets out to do little, but what it does, it does well. It’s a simple game about driving trucks through mud and solving the problems that subsequently arise. It is worth noting however, if you’re an absolute newcomer to these kinds of simulator, this game does require a good amount of time and patience to get get to grips with.