It has been a long time since “Amnesia: The Dark Descent” was released. Five years to be exact. When I first played Amnesia, I immediately fell in love with it. It just had a great atmosphere, playing with themes of Lovecraftian horror. The team at Frictional Games just created the perfect haunted house and in some ways revolutionized how games like these can be constructed. It became a big hit for the Swedish team, with Youtubers everywhere making videos of showing their horror. Amnesia proved successful enough to get a sequel “A Machine for Pigs” though it wasn’t created by the original team, instead that duty was left to The Chinese Room. I didn’t really care much for that game, but that was ok, because I knew the new title from Frictional was still coming. While it has been a bit of a wait, we are here now. SOMA has been released for PC and PS4 and you’ll notice immediately that it is probably more of a departure from the first Amnesia than expected, but at the same time feels very familiar. 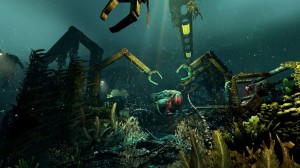 SOMA is a different beast in many ways. First is the setting. No longer are we sneaking through a haunted house, dreading the next jump scare or monster to show up. Instead we are dealing with a sci-fi game set in an underwater base. With this the Lovecraft influences are also gone. The story instead is more hard sci-fi and deals with what makes us human. Is our conscious something special? Is that what a soul is? Those are questions you will ask yourself and you will be confronted with. It is horror on a very different level. It’s less about the direct scare and more about making you uncomfortable in your own skin.

It seems to be a very deliberate choice, because jump scares are also something that is no longer a focus of SOMA. There are a couple, but the game is just way more about it’s creepy story and atmosphere. With the focus on story and atmosphere, it feels like enemies are less of a threat. They don’t show up as often in the game, but the developers seem to strike a decent enough balance with their appearances. It also helps build tensions with encounters as you don’t get to learn enemies’ patterns through repetition. You’ll never know how many hits it will take to kill an enemy, but more often than not it is more than one. Which means the encounters I had rarely repeated. Normally, I like more challenging games, but in this case it worked. If you have to repeat a section over and over again in a horror game it loses it’s effectiveness. From a gameplay perspective the encounters are still all about running and hiding from the enemies, because there is no way to actually fight them. 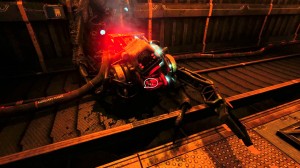 Puzzles are also still part of the gameplay. They mostly involve finding items and using them at specific spots, but sometimes you might also need to use some computer interface and change some data around to make things work. They are never huge brainbusters, but offers up enough variety. You also still have all the tools of item manipulation that Amnesia gave you. Which means you can pick almost everything up in the environment, carry it around, look at it from all sides, all that good stuff. There are desks or lockers you can interact with. Sadly, I think they don’t do enough with this part of the game. I wish it was necessary to interact more with the environment in these ways because clearly a lot of care went into them.

Review 6 (out of 7): Frictional delivered another great horror adventure with SOMA. One that is slightly different from Amnesia, but knows what it’s focus is and unlike “A Machine for Pigs” makes it work. You will be hooked by the creepy atmosphere and story for around 8 hours, and afterwards probably continue to think about some of the philosophical questions it does bring up.