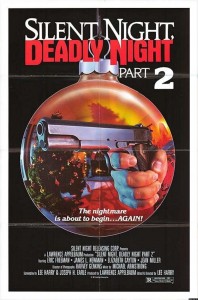 Just as Rudolph the red-nosed reindeer pierced through a veil of fog to help Santa Claus deliver joy to children, 1987’s Silent Night, Deadly Night Part 2 slashed its way through countless uninspired holiday-themed slasher flicks to deliver a one of a kind experience to fans of schlocky B-movies.

Set shortly after the events of Silent Night, Deadly Night, the sequel focuses on 18 year-old Ricky Caldwell, who is the brother of the killer from the previous film, Billy. Now institutionalized for committing a series of murders, Ricky recounts to a psychiatrist the events leading up to his crimes. The setup is a transparent excuse to reuse footage fromSilent Night, Deadly Night, but the fact that every notable death sequence is shown makes this feel more like a double feature than anything else. It’s just a shame that the scene with Billy visiting his crazy grandpa didn’t make the cut. 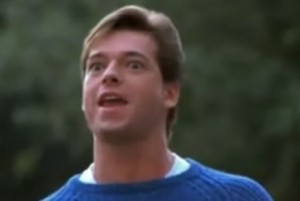 I’d normally be very down on a horror movie that spends a sizeable chunk of its running time showing a character speaking to a therapist, but SNDN2 has an ace up its sleeve in the actor who plays Ricky. Resembling what I’d imagine a roided out Ferris Bueller to look like, Ricky is all bravado and eyebrows. Actor Eric Freeman snarls as he delivers Ricky’s threat-laced dialogue, and I can’t even begin to describe how wonderfully fun it is to watch his performance.

After the clip reel from part one reaches its zenith, Ricky begins to shed light on his own atrocities. It seems that Ricky inherited his brother’s misplaced sense of right and wrong, though Ricky acts like more of a deranged vigilante at first. After killing several degenerates, Ricky settled down with what he assumed was his pure and virginal girlfriend, Jennifer. After a run-in with Jennifer’s ex-boyfriend shatters Ricky’s perception of her, he loses his mind and goes on a killing spree, punishing anyone he deemed impure. After finishing his tale, Ricky easily murders the psychiatrist and escapes the institution. With Christmas just around the corner, Ricky grabs an axe and continues his brother’s bloody legacy. 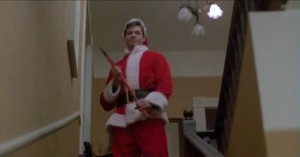 I really can’t stress just how much of this movie’s entertainment value is derived from Eric Freeman’s performance as Ricky. There are other instances of hilariously bad acting as well, but Ricky’s gleefully psychotic personality makes him a character for the ages. If you don’t believe me, just watch this. SNDN2 doesn’t have much in the way of creative gore, but like its predecessor, is a fun film for those who enjoy ridiculing over-the-top performances.

Rating: 5 (out of 7) – Silent Night, Deadly Night Part 2 truly is the gift that keeps on giving for fans of B-movies.