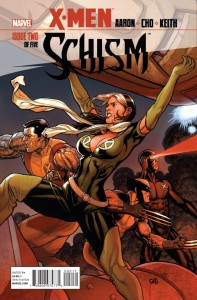 Â Â  X-Men Schism #2 follows Cyclops as he tries to ready the X-Men for anything as the world reactivates Sentinels and Mutant fear rises (again).

When it comes to events, people usually complain that the first few issues are all build up, and I can certainly see some validity in this case. We’re two issues in, and while we know Sentinels are the big threat of the event (or so it seems anyway), the big thing we were promised (the Cyclops/ Wolverine fall out) hasn’t began to rear its head, and since we’re two fifths done this event, I’ll admit that worries me a bit. That being said, this “build up” has been fun and very solid.

Another complaint I had seen though, was that this event was too focused on Wolverine and Cyclops, which baffled me. Schism had been billed from the start as an X-Men event with those two at the forefront, so that complain hadn’t made much sense to me. If you were one of those people, then worry no longer, because this issue definitely gets into more of the other X-Men which helps to ramp up the scale of things too. Speaking of scale, I did like the inclusion (even if they were only mentioned) of some of the Marvel Universe’s regular, non-mutant, super heroes, and also let us know when the event takes place in relation to Fear Itself.

Now, on to the artwork! If you’re familiar with Frank Cho then you know he does some great work, and this is no different here. Like Carlos Pacheco (the artist on issue one) he does some very realistic stuff, without sacrificing the quality for that realism, and conveys emotion well. My biggest problem (and my only, I suppose) with the art, is that coming off Pacheco’s amazing stuff last issue, anything is pale in comparison. Good art is good art though, and boy, is this some good art.

New Reader Accessibility Rating: 3. If you haven’t read last issue, you’ll be kind of lost here. Not to mention the references to all the other mutants and super heroes, as well as the X-Men being on Utopia and all. Not the best place to jump in. Try and find issue one at the very least.

Recommendation: Check it out. If you’re a fan of the X-Men, and somewhat up to date in the lore, then you’ll probably love this. Otherwise, you better get started on reading those trades…