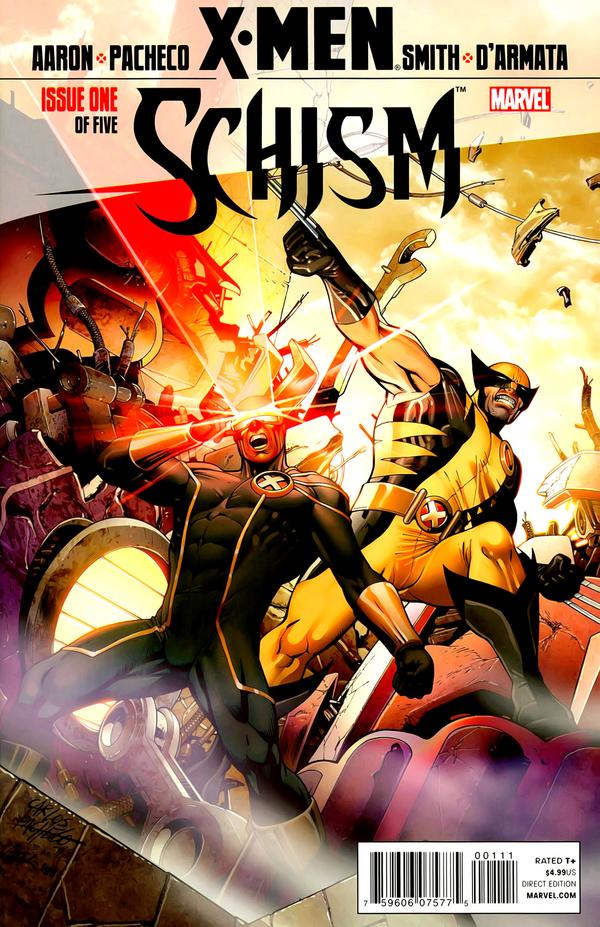 X-Men Schism #1 is the first issue of the X-Men event of 2011, and sees Wolverine and Cyclops going to an arms control conference in Switzerland and naturally something goes wrong and sparks up mutant fear (again).

Most first issues in events get hampered down by trying too hard to set up the rest of the event and forget to actually entertain the reader, but I’m happy to say that this is not the case for Schism. Jason Aaron has proved that he knows his way around the X-Men thanks to his work on various Wolverine books over the last few years, but boy, was this on another level. The dialogue between Logan and Scott really drives home the fact that they finally trust each other after all these years, and rely on each other more than they really want to admit. Hell, practically this entire issue is about Wolverine and Cyclops, so the fact that he’s able to convey that so well works wonders on the quality of the book. That being said, there is a nice character moment that doesn’t revolve around Cyclops and Wolverine, though it does revolve around Wolverine still. If you know your X-Men comic, you know that Logan has a history of mentoring younger X-Men (see: Kitty Pryde and Jubilee) and there’s a really touching moment here where he decides it’s time to mentor a new teenage X-Man.

Now, the art… holy crap! Carlos Pacheco did some art for the X-books a few months back (their point one issue), and I loved it then and I love it even more now. Pacheco has some of the most realistic art in comic right now, yet he somehow makes a bunch of grown-ass men running around in skin tight spandex look amazing, or dare I say… uncanny! Of course, some realistic art would be pointless without being able to draw emotions well, and thankfully he can do that well, eXtremely well.

One last thing I want to touch on is the actual, well, plot of the book (nice of me to mention, I know). We see the return of a character from Grant Morrison’s New X-Men run, which fits damn well with how Morrison established him back then, and naturally there’s someone behind the scenes manipulating things for their benefit. The person I’m referencing definitely seemed interesting, even in the brief glimpses we get, but the reveal at the end is a big shocker — in a very good way.

New Reader Accessibility Rating: 5. You really don’t need to know much about X-Men to get the most out of this book, and it seems that this event will continue to shape the X-Men for years to come, in the same way that Messiah Complex still has huge ramifications four years later, so now is the time to jump on.