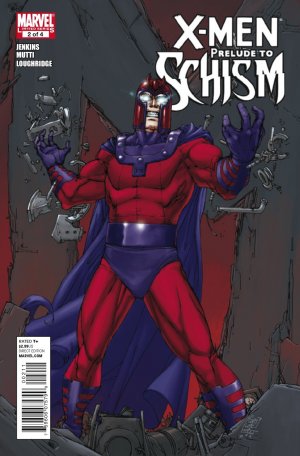 X-Men Prelude to Schism #2 essentially re-caps the life of Magneto, and continues to build suspense and hype for Schism. But is it any good?

The short answer: yes. On paper, this sounds like a good book. It’s got a simple and easy to follow plot, it’s well written and the art is good. But something’s off, and I know what it is. Like I said, the plot is easy to follow, but in this case, that also means not a lot happens. Chances are if you’re an X-Men fan, you already know all the details about Magneto’s past, so this is literally a bite-sized re-telling of his origin, and I don’t see how this relates to the upcoming Schism at all. In fact, the only references to Schism (as with issue one) are the times when a character says something extremely vague like “Oh no, something big is coming and I don’t know if we can stop it”, which really makes this not a prelude. I will say this though, the pacing of the book was much better than the last issue.

So, if the plot’s about on par with the first issue, what’s the rest of the book like, you may ask. Well, we’ve got the same writer on-board so I don’t have much new to say on this front, other than Paul Jenkins knows these characters decently well. Now, to the actual improvement: the art. Last issue’s art was a little grainy, and needed some more detail, but thanks to this issue’s artist Andrea Mutti, this is no longer an issue. We’ve got some good details and some good expressions on all the characters which is needed for a dialogue heavy book, plus nice shadowing work and some fantastic colours. And the cover is pretty nice too, although it’s by Giuseppe Camuncoli and not Mutti.

New Reader Accessibility Rating: 4. Again, as long as you know some generally X-Men history (like who the characters are), you should be fine. You might be confused by the fact that they’re on Utopia if you haven’t been reading Uncanny, but it’s not a huge deal.

Recommendation: Check it out if you’re a fan of X-Men and Magneto, but don’t expect much to happen besides seeing Magneto’s back story (again).