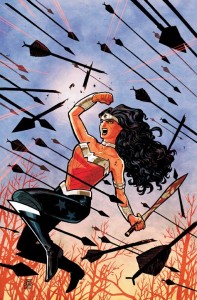 Synopsis-Â The godsÂ are angry. Zeus is apparently missing, and there are dark forces trying to kill a woman named Zola. Zola isÂ carrying Zeus’s latests, yet unborn Child.Â  Zola is saved by Hermes, and is transported to her new protector, Diana, also known as Wonder Woman. Will these Dark forces succeed, or will Wonder Woman previal?

For a first issue, there’s a lot of really cool parts. The first few pages have some characters whom, I have no idea who they are. One of these characters is one of Zeus’sÂ illegitimateÂ children. He’s on top of a SkyScraper with a group of three girls. He’s looking for Zeus. The other character is not really explained at all, but has a glowing scythe and a peacock like robe. Â She creates a couple ofÂ Centaur-monsters to try and kill Zola. You don’t see her again, but you do see the dark mysterious man again.

The Story so far is pretty interesting. This is Warrior Diana in full kick butt mode. She’s also Huge. She’s Much Taller than Zola. The majority of this issue has her fighting the monsters that PeacockCloak-Sythe woman had created.Â There’s also a ongoingÂ dialogÂ between the man and the three women he’s using as oracles in little thought boxes during all the action.

The artwork is great. Not a single boring panel. All the expressions, camera angles, and poses feel really natural. The Colors also really pop! The action sequences, Backgrounds and effects are all pretty great. The artistic style isn’t my favorite, but it gets the job done pretty well. Both Diana, and Zola are pretty beautiful in their own way, and the action is fun. I rather enjoyed it, And I want to know who the Mystery man and Peacock-Scythe Lady is.

Survival Rating- LIVE I really want to see where they go with this. In the past it seemed that DC didn’t know what to do with Wonder Woman. So far I’m enjoying this incarnation, but some more explanation is needed. I’m sure all will be revealed in future issues.