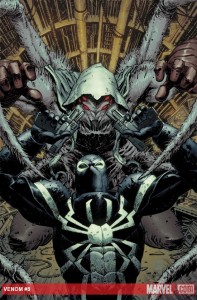 Venom was always one of my favourite Marvel characters growing up and now with this new take on him, it is no different. Flash Thompson was offered by the government to join with the symbiote and be a top-secret agent. Flash was told that he is only able to wear the suit for 48 hours, after that the symbiote will take over. He has fought several opponents so far but Spider-Island seems to be his biggest task yet. In this issue, Flash is sent off on a mission to eliminate the Queen of Spider-Island.

This issue has everything you could ask for, from a great fight scene between The Queen and Venom to a man struggling to be a soldier and live a normal life. Rick Remender did an amazing job writing this issue. Throughout the book, we see lines from a letter Harrison (Flash’s Father) left Flash before he died, which I loved. Rick ties in Harrison’s letter to some of the events that are going on. We can really see how his fathers death has affected him and that his mind is not in this fight. I really liked the interaction between the Queen and Venom, there were a lot of sexual innuendos that actually worked and didn’t seem creepy. There was also a surprise appearance at the end of the issue that caught me off guard.

Aside from a comic needing to have a writer that will pull me into the story, I also need a artist that will do the same. I am disappointed that Tony Moore isn’t working on this comic 100%, I loved his work on the first few issues and as well on the early issues of the Walking Dead. That being said, I believe Tom Fowler is doing a great job, the detail is great and it is appealing.

In the end, we see that it is not over and we have to read Amazing Spider-man #672 to find out what happens, which is kind of a bumper if you are not reading ASM. But I recommend that you do read Spider-man. Dan Slott is doing an amazing job with Spider-Island. If you are reading Venom you might as well pick up Amazing Spider-man as well, they tie in nicely. This next year is going to be big for Spider-man and Venom, you don’t want to be the one missing out on it.

New Reader Accessibility: 3 – Yes I know, this is the last part of the Venom Spider-Island story line but fear not, that first page with the back story should be enough to get you caught up.

Recommend: Buy It – It is one of my favourite comics this year, it’s Venom kicking ass as a solider while still having the Venom qualities that we love creeping up once in a while. It has it all, what’s not to like about this comic?