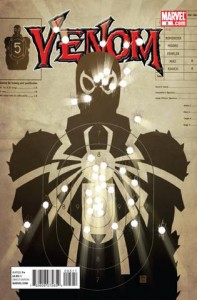 Â  Venom #5 gives us some insight into Flash Thompson and why he does what he does.

This month, Rick Remender shows off the heavier side of his talent and deals with some real-world issues that affect Flash every day, and he pulls it off very well. The issue in question is about his father, and how he was never proud of him, and how that lack of love made him work to be the best at everything, hoping one day to get some acknowledgement from him. Of course, that means that this is a downright depressing issue at times which is actually a compliment to Remender for making us care and feel for Flash. I’m sure we’ll look back on this issue sometime in the future, and remember that this is where we really got to care about him. Of course, this issue isn’t all about Flash and his father issues; it also deals with his relationship with Betty Brant, which has been one of the best parts of this series. It really drives home how his disappearing to go off as Venom affects those around him, and definitely makes it seem like he’ll have to pay for his double life eventually.

As for art, this month we’ve got Tony Moore doing the opening few pages, and Tom Fowler doing the rest of the book. Tony Moore’s work on the opening six pages is great (it’s Tony Moore, how could it not be?) and sees Venom doing his thing and saving hostages from a crazy villain the way only he can. Moore’s gritty style that helps showcase the soldier aspect of this Venom is present and good as ever, but then we move into Tom Fowler. Fowler is by no means a bad artist, but coming off Moore, it’s a bit of a letdown. His style does share some similarities with Moore which does make the transition less jarring than it usually is in these situations. Overall, the art is solid, but I would have liked more Moore.

New Reader Accessibility Rating: 5. They make some reference to the previous issues, but this is mostly a one-and-done. If you know who the new Venom is, then you should be good to go.

Recommendation: Buy it! This is quickly becoming one of my favourite titles, and now is a good place to jump on if you haven’t, and if you have, don’t stop now!