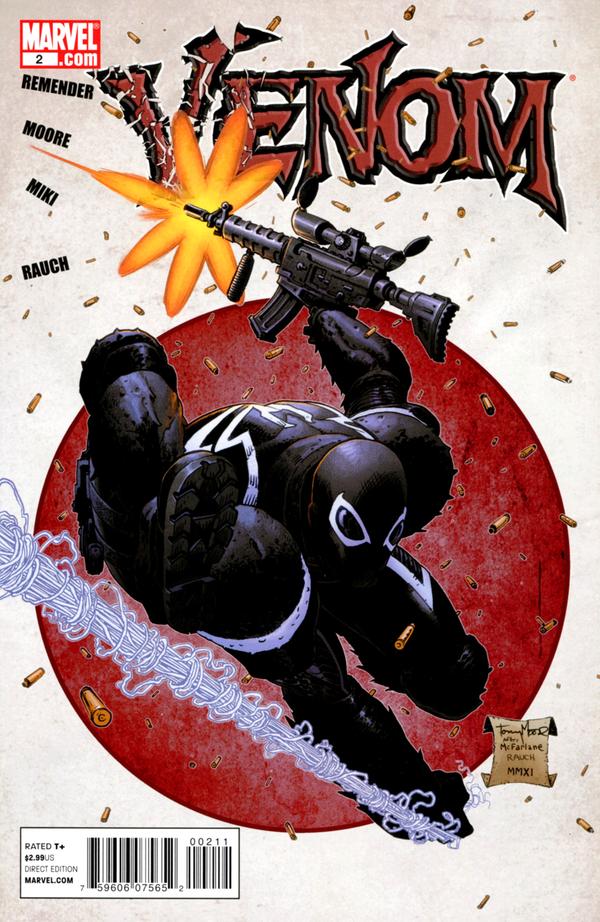 Tony Moore's homage to the days of Todd McFarlane's Venom

Flash Thompson (a.k.a. Venom) is sent to the Savage Land to destroy a factory that produces Antarctic Vibranium; however he runs into Kraven the Hunter and gets a bit sidetracked.

When I first heard about this new Venom ongoing, and that Rick Remender would be the writer, I got pretty excited. Why? Well, because it seemed like the perfect fit. This new Venom is very much a soldier, and Remender proved he knew how to write the military type during his Punisher run, so I thought he was perfect for the job, and over these last two issues, I’ve been proved right. Besides writing good dialog, the pace of this issue was fantastic and really feels like an action movie, which is a compliment. It’s pretty suspenseful, and will definitely keep you turning the pages.

You might remember Tony Moore from his work on The Walking Dead, and the quality of his art is just as good here as it was there. In fact, it’s even better since you get to see it in color! His art is pretty fantastic overall, but there are a couple standouts in my mind. The first thing is the character work. His work on Venom will probably stand the test of time and be the definitive work on this version of Venom, just as Todd McFarlane’s art is the definitive version of Eddie Brock’s Venom. Oh, and then there’s Kraven. His Kraven art is, in my mind, right up there with Mike Zeck’s stuff from Kraven’s Last Hunt. Now, if you ask me, one of the most important things a comic book artist can do is convey human expressions and emotions well, and Tony Moore can do just that. From Flash’s desperate and panicked expressions, to Kraven’s psychotic yells you get a sense of real emotion here. Another great thing about this issue is the cover. It’s a great homage to McFarlane’s work, and as far as I’m concerned, it’s just as good.

New Reader Accessibility Rating: 8 Going in, as long as you know who Flash Thompson is, and that he’s the new Venom, you should be fine. Obviously, it does continue the plot from the back-up in The Amazing Spider-Man #654, the entirety of ASM #654.1 and Venom #1 (all of which I highly recommend) but if you missed those, you should still be fine reading this one.

(Editor’s Note: This is a truly fantastic series so far, and the way they have set up Flash Thompson as the new Venom, and hiding his private affairs back home are intriguing. I can’t wait to see where this series decides to go as it seems to set up a lot of possibilities from Mr. Thompson.)