After being disassembled by Cyclops following the events of Second Coming last year, Wolverine, Fantomex, Psylocke, Archangel and Deadpool formed a new team that only had one rule “no one can know”. This book picks up shortly after the formation of the team and follows them on their first mission: kill Apocalypse. Naturally, things go awry for our heroes as they have to face the Final Horseman before they can get their hands on the reborn Apocalypse. It also deals with the relationship between Archangel and PsylockeÂ which is a pretty important relationship, because Psylocke is the onlyÂ person standing betwen Archangel and his evil personality that Apocalypse created.Â Â That’s all I’ll say about the plot though, as I don’t really like to spoil things.

Rick Remender has proven to be a great writer before in the pages of such books as Venom and The Punisher, and heÂ doesn’tÂ disappoint here. He takes the simple idea of killing Apocalypse, and manages to stretch it out over four issues without it feeling padded. The dialogue totally fits with all the grim characters and it’s always fun when Deadpool appears due to his penchant for P.U.N.s (I actually laughed out loud at them). My favorite part of his writing: the character interactions, which he does really well. The scenes with Pyslocke and Archangel are touching and they make you really hope both of them make it out okay. The scenes between Deadpool and… well anyone, really, are funny and remind you why he’s “The Merc with a Mouth”. 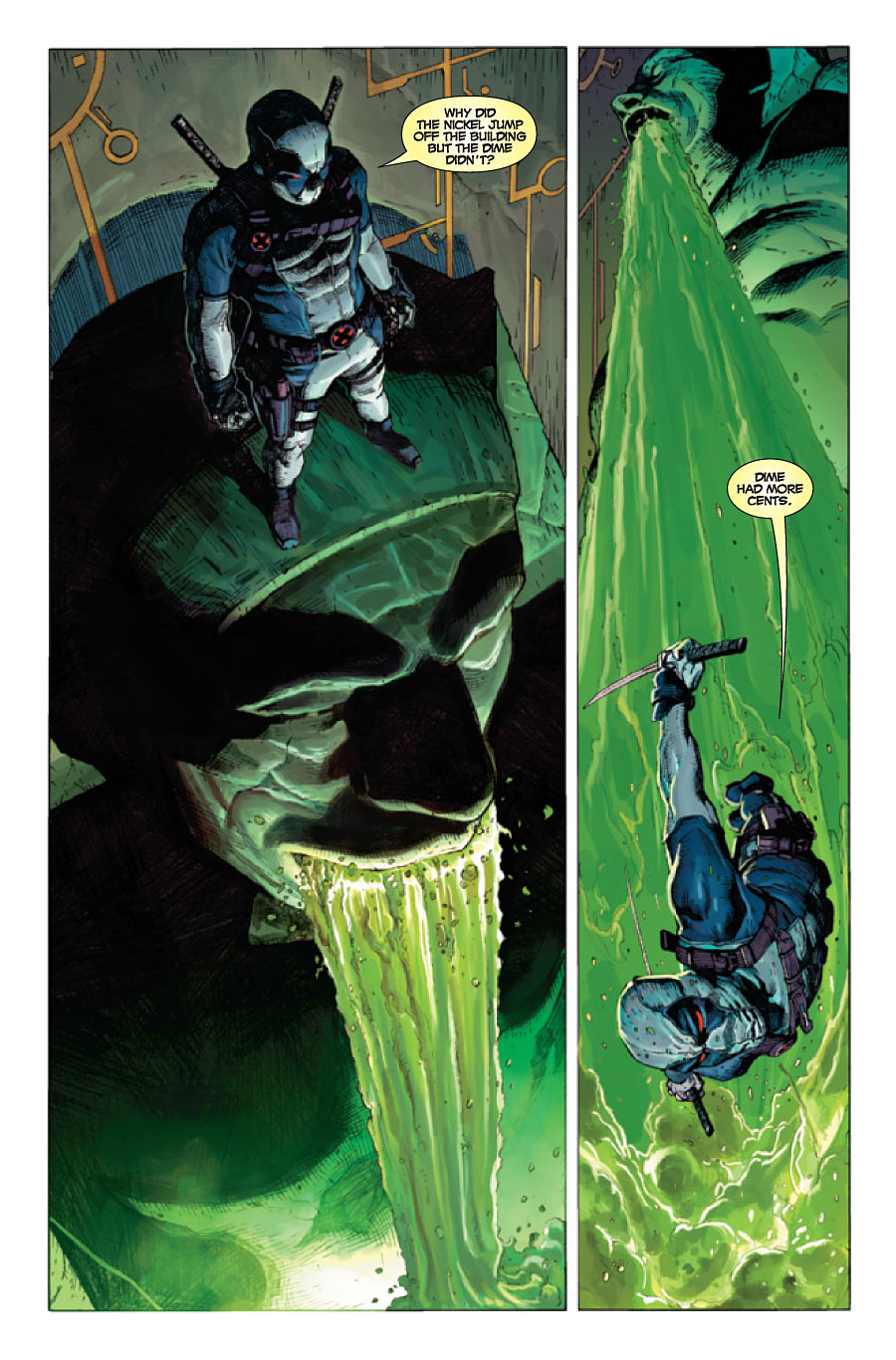 Jerome OpeÃ±a’s art is frackin’ beautiful. It complements the plot and writing, most importantly in the dramatic scenes and character interactions. There’s not a panel in the book that I have a complaint about. Seriously. Now since it’s so good, and I don’t have any complaints, there’s not a whole lot to say, other than that it’s some of the best comic book art out there right now. While on the subject of the art though, I’d like to mention that the cover is fantastic. The original series covers are also inside, and they are likewise awesome.

My only complaint about this entire package is that the story line, “The Apocalypse Solution”, is four issues long, yet this book only reprints Uncanny X-Force #1-3. I read this and loved it, but couldn’t find #4, so if I want to read the conclusion to the storyline I need to buy the trade for 20 bucks, which I do not want to do. Anyway, at $4.99 this is still a better deal than buying #1-3 separately.

New reader accessibility rating: 9 Considering this reprints the first three issues of a new series, there’s not much you need to know going in. As long as you know the characters and the maybe a bit of X-Force’s recent history, you should be golden.