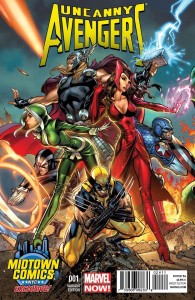 For months, I’ve been trying to peg down exactly what MarvelNow! was. It wasn’t a full on universal reboot as the New 52 was for DC last year, but it also wasn’t supposed to be a simpleÂ continuationÂ of what had already come. It was some mystical beast that would be new-reader friendly while maintaining all of the story elements from other arcs, but not making them be an important aspect of the enjoyment.

Based on that criteria, this book failsÂ spectacularly!

Let’s put that aside for a second though. How is the book itself? It’s a solid read, but one that relies heavily on knowing the events of the conclusion of Avengers Vs. X-men. The book does a decent job of filling in some of the blanks without going into finer details. We learn that Charles Xavier is killed by Cyclops, but never really told why. Based on this book, I don’t know whether they are attempting to play Cyclops as a villain or a misunderstood hero, but then again isn’t vital to the narrative at this point.

Next, we’re told of an event in which mutant-kind showed a sign of strength which may have frightened those who before hadn’t really feared them. Again, we aren’t given specifics, but we know it plays into the larger narrative as we see the return of Avalanche to really push the fear of mutant-kind into a frenzy.

Finally, we’re told of the Scarlet Witch and her remorse for her actions. It is vaguely hinted at that she was/is responsible for the lack of new mutants, and that something recently has triggered the rebirth of mutants, but it is all very vague. It plays into the story as she has a confrontation with Rouge, but they never go any deeper than that.

On one hand, now of this makes for a bad story. It is an interesting read that does kind of grab you to see where the series goes. Especially being that for about 80% of the issue, it is actually focused on the X-men and not the Avengers as the title implies. Who will join this new Avengers team? How will mankind react? How will mutant-kind react? Those are fair and interesting questions, and I can’t wait to see how the series tackles them.

At the same time though, as a number 1 issue, this is soÂ dependentÂ on prior events in the universe that it does make it a tough read as a jumping on point. For someone who isn’t well-versed in the Marvel universe like myself, I wanted a story that I could start reading and not feel like I’m missing a ton of stuff. But here it is, and there’s all this questions that I’m hoping the comic answers, but it never really touches on. Sure in this day and age, I could Google or Wiki the answer no problem, but I shouldn’t have to be forced to do extra research to enjoy a jumping on point.

I guess the root of the issue is that I’m still not sure what MarvelNOW is even after reading the first book in the series. Is it just a simple branding for Marvel to use as they shuffle around their creative team? Does it deal with the fall-out of Avengers vs X-men? Or was it intended to work as a jumping on place for new and lapsed readers?

Before we wrap, it is only fair to talk more about the issue itself. We’ve broken down the key plot elements that are introduced, and introduction is the best word here. There really isn’t a lot going on in this issue. There’s Xavier’s funeral service, there’s some talk with Avengers and trying to recruit members and there’s a tease of a major villain for this story. And that’s really about it.

The art is kind of a mixed bag for me. When it works, it works really effectively. Like the opening page, which sees a man being operated on. The visuals of the exposed brains, the eyes being kept wide open and the color palette are remarkable. Contrast that with people’s faces in the comics, and most of those don’t really work as well for me. They wear these very simple looks with some sparse backgrounds thrown about. Overall though, the package works. Love the color scheme for certain scenes I won’t spoil.

Simply put, Uncanny Avengers 1 is a solid read, but nothing special. Nor does it really excite me to see where or what the MarvelNOW is. That said, I do plan on continuing the series just to see where the pieces eventually fall and if worth investing in long-term.