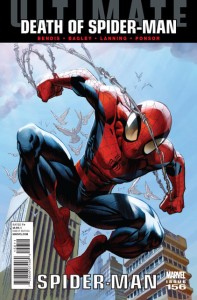 This week’s release of Ultimate Spider-Man brings what feels like the real first chapter of the Death of Spider-Man event; however, the way I see this issue is the glorious return of Mark Bagley on art! Don’t get me wrong, I enjoyed Immonen, Lafuente and Pachelli’s respective work, but Bagley worked on this book with Bendis for 111 issues! This was a series I started reading in my teens and it has continued to influence me as I went through high school with Peter.

One thing this series has always had going for it was the stellar writing of Brian Michael Bendis. From the retooling of the mythos to the reinvention of various characters, the key factor that has anchored this series is heart. Sure, the title may be Ultimate Spider-Man, but as readers we get more time with Peter out of costume than in it. This worked in the latest issue by giving us a scene with the newly reunited Peter and Mary Jane to show that no matter what happens, they’re there for one another. This scene is cut short when Steve Rogers shows up to give Peter his after-school training session – compliments of S.H.I.E.L.D. Steve, aka Captain America, meets up with Peter to give him a speech about responsible fighting and the inevitable death they all face. This nice hero narrative is framed by the reentry of Norman Osborn into the series and his breakout of the Triskelion. Not only does Norman ‘Gob Out’, but Nick Fury and his team of Avengers have gone off the grid in New York City. This leaves S.H.I.E.L.D. director, Carol Danvers, with the choice of focusing on Norman and his ragtag group of villains or on the newly rebellious Fury and his squad. With this being a great set up to events in Death of Spider-Man, you can expect a great cliffhanger.

Now on to Bagley! His return to the series is as if the title has entered a proverbial homecoming. His cartoonish style and clean pencils show all the depth and emotion a reader could ask for. Not only does his art make a triumphant return, but his layouts do as well! Bagley has always liked shaking things up on this title by having characters and other various aspects of panels pop out of the frames to help translate the dynamic action of what’s going on in every set piece.

New readerÂ accessibilityÂ scale: 8 This is a series built on the idea of Spider-Man in the 21st Century without forty years of continuity to worry about. That being said, this issue really marks the beginning of the Death of Spider-Man event – so if you see the intimidating ‘156’ on the cover, there’s nothing to worry about! It’s a series with a lot of heart, great writing and amazing art; plus, this issue marks a great Spidey-centric event for readers to follow in 2011.