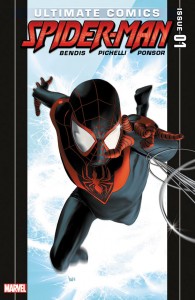 After much media hubbub, the new Ultimate Spider-Man is finally here, and boy is it…um…short.

We start off eleven months ago in the main laboratory facility of Osborn Industries where Norman Osborn reveals to a Dr. Markus that he created Spider-Man.Â  He now wants to recreate the formula found in the spider that gave Peter his powers. Buuuutttt the spider died, annnnnnd he didn’t keep any records, annnnnnd he failed at reverse engineering Petey’s blood.Â  Osborn sucks at his job.Â  So now he threatens this new scientist into doing it for him.Â  There are other spiders though.Â  And of course one casually walks away.Â  Really, how does this place stay open?Â  Oh.Â  Oh, it doesn’t?Â  We’re treated to an article about how Osborn experimented on himself and became the Green Goblin and yada yada: jail.

The Ultimate version of The Prowler (I thought he was a funky colored Deadpool before looking him up) sneaks into Osborn Industries, steals some cash and a mysterious red box.Â  And the spider from before tags along for a ride.Â  Of course.

Miles Morales, a seemingly quiet and introverted kid, along with his parents attend a lottery drawing to try get him into a charter school.Â  Miles makes it, but then sees some crying children who weren’t as lucky.Â  The Spider-Man guilt starts young with this one.

Miles stops by his uncle’s place for a chat and popsicles.Â  There’s a small red box on the coffee table.Â  More importantly there’s the spider from before.Â  Boy bites popsicle.Â  Spider bites boy.Â  The circle of life is complete.Â  Cue foaming at the mouth and passing out.Â  His Dad comes in and has some words with the uncle.Â  Looks like we might have a different type of uncle mentoring Spider-Man this time around.Â  Miles leaves in the middle of their argument.Â  He exhibits his first spider power as his Dad goes to look for him.Â  I’ll give you a hint: it isn’t one we’ve seen before.

So yeah, that was a the first issue.Â  Now I know Bendis, and Ultimate Spider-Man in particular, are known for their decompressing of stories (it took Peter five issues to done the costume and the decade long run all took place within one year of comic time), but this takes the cake.Â  So little actually happens.Â  I skimmed through the first issue of volume one from 2000 for a comparison.Â  Twice as long as this one and we’re introduced to the entire cast of secondary characters and get feel for all of them, Peter gets bit and exhibits several powers, and the main baddie is set up.Â  Probably the most important thing was that we got to see Peter’s life before being bitten, whereas Miles is at this point is just there.Â  Perhaps instead of being a nerdy kid like Peter was, he’s just apathetic?Â  Given the time frame, he has had spider powers almost as long as Peter did, so it seems like it’ll be the death that gets him to done the costume and fight.Â  I do look forward to whatever his uncle’s involvement might be.

Now, I’m not saying this was a bad issue.Â  It wasn’t.Â  The art was great and the character interactions were done quite well.Â  Quiet as he is, Miles’ face was expressive enough to get a pretty good idea how he was feeling at any given time.Â  Subtle but clear.Â  But it’s just not worth $4.00 for so little story.

New Reader Accessibility Rating: 5.Â  It’s a #1.
Recommendation: Borrow it.Â  Or trade wait.Â  I bet this will be awesome reading in 50 issue chunks.Â  As a 20 page monthly though, seems like it will be hell…especially on your wallet.