In the 1960’s, an Autobot weapon, escaping from Cybertron, landed on the moon. Now, it’s up to our heroes to find the weapon, and use it to finally end the war against the Decepticons. During this effort, the Autobots discover one of their ancestors: Sentinel Prime (Leonard Nimoy). Â Little do the Autobots know, there’s a much sinister threat facing them. At the same time, Sam Witwicky (Shia LaBeouf) has another battle to face: keeping his new girlfriend. 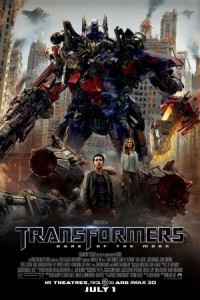 I think that’s roughly the plot of the movie. I should remember, as this is the kind of film that stops every fifteen minutes to remind you of what you’ve just saw. But it was long, and boring, so I’m not that sure.

I liked TRANSFORMERS. It was fun, charming and had some great action scenes. It wasn’t much in terms of narrative and story structure, but it’s still enjoyable to watch. And then its sequel, REVENGE OF THE FALLEN, came out. A sequel has to top its predecessor. It has to be bigger and bolder and show us things we never saw in the previous film, which REVENGE OF THE FALLEN did. It gave us racist robots (Mudflaps and Skids) and huge robot testicals. Thanks for that, Michael Bay. Also, in trying to top the first movie, it was louder and the action scenes were bigger. This should have made it more entertaining than the first. It didn’t. It made it hard and confusing to watch, and probably gave a lot of people headaches. These bolder action scenes also came at the expensive of a decent script and plot.

I’m happy to say that DARK OF THE MOON is a slight improvement on REVENGE OF THE FALLEN. But let’s be honest, that’s not really saying much. We’ve no longer got the racist robots or the clanging genitals, which is a good thing. But we’ve also no longer got the charm and fun the first film had. That’s probably been lost forever. I blame the clangers.

There’s also no more Megan Fox, and you know what? I kind of missed her. A bit. Behind-the-scenes of the film, it’s rumoured that Fox got into a heated argument with director Michael Bay and stormed off set. Her replacement: a model. Literally. This is Rosie Huntington-Whiteley’s first film. One of the biggest blockbuster releases of the year. Her debut film. Great. It really shows, but, script-wise, she didn’t have much to work with anyway.

We’re supposed to believe that Sam is worried about his new hot girlfriend leaving him, because she has a boss that’s hot. I found Sam harder to relate to in this then I did the previous two films. I was more sad that Bumblebee had left him then over his girlfriend troubles. Also, the reason Carly Spencer is even interested in Sam seems to be because he saved the world, twice. The rest of the world doesn’t know about this, of course. I know in a movie about giant robots, a romantic sub-plot really does become second fiddle, but are we really supposed to believe that these two are in a relationship together? In once scene, Carly tells Sam “You’re the perfect man for me” and then in a few scenes later, the two discussing if Carly likes Sam more now that he has a job. I thought he was the perfect man for you? Hang on a minute, what did happen to Megan Fox? Oh, that’s right. She wasn’t any good for him in the end. He just spent two movies getting shot at for her. Young romances eh?

Michael Bay also attempts to comment on the current recession, by having Sam out of a job and looking for work. This is probably his attempt at making the character more relatable for audiences. Even though he lives in a fancy apartment (which his girlfriend is paying rent for, apparently). 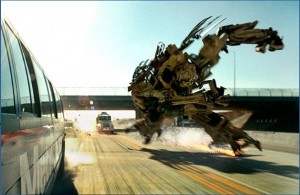 As for the running time, basically, it’s too long. I’m all for a movie that’s over two and a half hours long. But this film could have easily cut down the first hour into thirty minutes. Then we could have got to the last hour, which was mainly just action, a lot quicker. Because that’s what we want from a TRANSORMERS film. It’s not 2001: A SPACE ODYSSEY. We want to see shit get blown up.

There’s some stuff in DARK OF THE MOON that I like. The scene were Sam takes on Starscream is great (and sadly one of two scenes Starscream gets), and there’s a plot twist in there that actually surprised me. But then there were a few more plot twists and I was getting a bit fed up and just wanted them to get on with it.

Also, I saw it in 3D, and I don’t regret that I did. 2011 is seeing the death of 3D, but when 3D is used creatively (AVATAR) it can really benefit a film. Now, I’m not accusing Michael Bay of doing anything creative, because, quite honestly, he’s not. But there are scenes, especially towards the end, that seem to make the addition of 3D worthwhile. Although, I’m sure it’d be just as good in 2D.

Verdict: Rent it. It’s still lacking the charm the first film had, and it’s still long and dragged out as REVENGE OF THE FALLEN. But there’s some impressive stuff in here. You just have to work your way through the first hour to get to it.